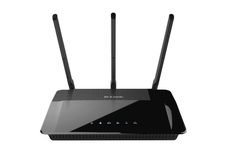 The interface on this router is as clean as it gets, making all of its main functions easy to use