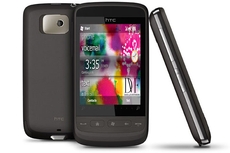 Windows Phone 7 adds new social networking and productivity features all within a clean and touch-friendly interface.