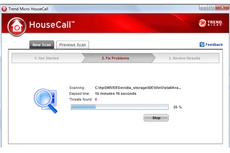 Trend Micro HouseCall is a free utility that scans for and removes viruses, Trojans, and other malware.