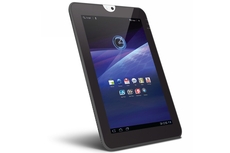 Toshiba Tablet (AT100) review: A 10.1in Android tablet with full sized HDMI and USB ports, and a removable battery