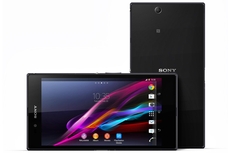 The Xperia Z Ultra's huge 6.3in screen blurs the line between a smartphone and a tablet