Popular mouse gets reduced in size but keeps all the features Pure Evoke-1S Marshall: This digital radio goes up to 11 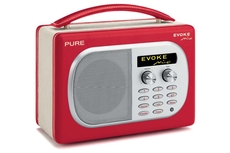