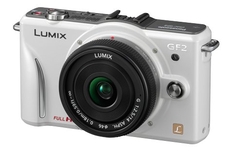 The Lumix GF2 is a good compact interchangeable-lens camera, but its touchscreen interface is inefficient