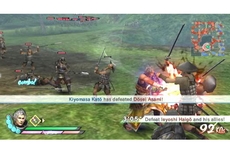 Despite Samurai Warriors 3's simplicity, it is a hugely entertaining game If there's any downside to Sin and Punishment, it's that the game doesn't feature true two-player co-op All in all, it feels like Puzzle Quest 2 on the DS is very limited by the hardware

IN PICTURES: Thousands of gamers flock to EB Games Expo

EB Games Australia's annual expo is in Sydney's Olympic Park from October 3 to 5. The three-day event (which is scheduled to coincide with the school holidays) hosts game developers and publishers, alongside manufacturers, each claiming their stake across the giant Dome; there's consoles, PCs, accessories, toys, collectibles, cosplay, DJs, robot wars, and of course, a wide array of big titles, and hands-on preview sessions of yet-to-be-launched games for those willing to brave the lines.