The app design isn't as straightforward as it could be, but overall Total Protection offers a lot of value. 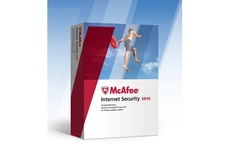 In Pictures: McAfee’s most dangerous cyber celebrities of 2014