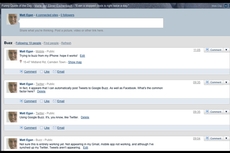 At this point Google Buzz has no links into Facebook, which puts Google in direct competition with the world's biggest social-networking site

9 Gmail tips that will let you take a long lunch

I've used practically every Web-based e-mail program, from Hotmail to Yahoo to Chick Mail (seriously), and I have to say Gmail is awesome. But it could be better.