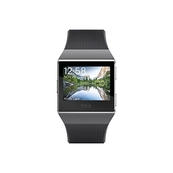 Steps, distance, pace, track, heart rate, this thing can do it all

In Pictures: Fitbit bring the Versa smartwatch to Australia

Here's a hands-on look at the new Fitbit Versa.

Fitbit CEO James Park made a trip to Sydney to debut the company's first full-blown smartwatch, the Fitbit Ionic.