Acronis makes True Image Home 2011 even easier to use 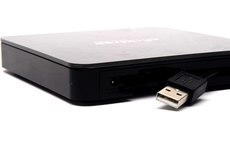 Clickfree Wireless Backup review: A 500GB external hard drive with Wi-Fi that you can set and forget