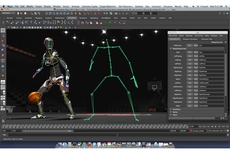 Debuting in Maya 2011 is the Camera Sequencer which manages multiple camera shots in an animation sequence.