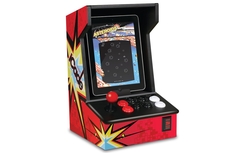 Ion's iCade Arcade Cabinet is a trip down memory lane, but it's overpriced and doesn't work with all games Another arcade-style WWII dogfighting sim lands on our consoles but does it soar or crash land?

It's the 30th anniversary of this 8-bit PC classic. We celebrate the occasion as we always do, by tearing the product apart and showing you the pieces.