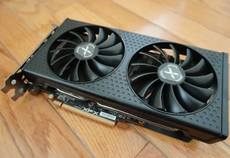 The AMD Radeon RX 6500 XT brings ray tracing and affordable GPUs to the masses, but doing so requires some unorthodox tweaks.

It offers an amazing amount of performance and value.

Is one of the first AM4 motherboards any good? A quad-core, AMD Phenom-based HP laptop for under $1000

In Pictures: AMD up their arsenal with Ryzen 2 & Radeon RX 5000 graphics cards

AMD brought a range of new goodies to their 2019 Computex press conference, including their first 7-nanometer graphics cards.

AMD announced the 32-core Threadripper 2 CPU and more during their press conference at this year's Computex.