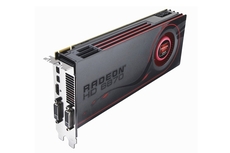 AMD's Radeon HD 6800 series has arrived, and the results speak for themselves: Radeon HD 6870 is the mid-range card to beat.