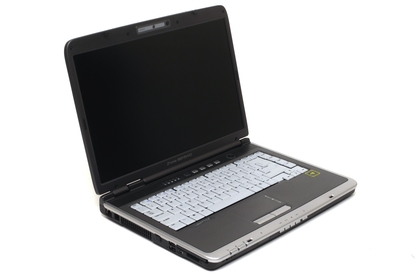 The Zepto look is stylish and has some power under the hood. It's a shame our model has now been superseded, but the features of this notebook are good and will soon carry across to the new Santa Rosa build. The only thing that we really didn't like about this notebook was the brightness of the screen and the less-rigid LCD panel.

We've seen plenty of notebooks based on Intel's latest Centrino Duo platform (codenamed Santa Rosa), but the Zepto Znote 6625WD is one of the first of these high-end notebooks to fully utilise the potential of the 800MHz front side bus (FSB), which is offered by the 965 Express chipset in Santa Rosa. It performed well in our tests and has a stylish design that doesn't compromise build quality.

Although the Znote 6625WD only packs a mid-range Intel T7100 1.8GHz CPU, it includes 2GB of 800MHz DDR2 RAM, rather than the mere 667MHz RAM used by most other notebooks we've recently tested. RAM speeds and throughput can get a little technical, and the effective performance boost may be minimal, but the bottom line is this; if you have a CPU with an 800MHz FSB, why not complete the circle with 800MHz RAM?

All of that aside, our Znote 6625WD is installed with Windows Vista Home Premium and offers an NVIDIA GeForce 8600M GT graphics chip, a nice 15.4in, 1680 x 1050 LCD screen, a 1.3Mp webcam and a set of reasonable speakers. It also offers a 100GB, 7200rpm SATA hard drive and a DVD re-writer with dual-layer support.

The keyboard is spacious and comfortable to type on for long periods of time and the touchpad is responsive. Shortcuts to the webcam, Internet, mail and two programmable buttons are situated just above the keyboard for quick access. Media junkies will appreciate the media controls, which include pause/play, forward and back, and the physical volume controls are convenient. There's also a media card reader supporting MMC and SD cards, which is convenient for photographers with the relevant digital camera.

In our benchmarks, the Znote performed fairly well. However, despite the increased speed of the RAM, we saw no notable boost in our results -- its performance was on par with notebooks that have 667MHz RAM.

Theoretically, with 800MHz RAM, we should be getting a throughput of 6.4GBps, unlike systems using 667MHz RAM (such as the similar Acer Aspire 5920G), which has only 5.3GBps throughput. At 6.4GBps, the Znote is flooding the FSB with as much data as it can handle. However, as seen by the Znote's WorldBench score of 72, which is identical to the Acer's score, there's no improvement worth noting.

In our MP3 encoding test, where we encode 53min worth of WAV files to MP3s, the Znote recorded an average score for its class. In the single-threaded Cdex test, it took 150sec to convert the files. In the multithreaded iTunes test, it took just 98sec.

The Znote 6625WD is not specifically designed as a gaming notebook, but the new-generation NVIDIA GeForce 8600M GT graphics chip, with 512MB of RAM, scored 2925 in 3DMark06, which will allow some gaming with newer titles. That said, you shouldn't expect excellent frame rates. In 3Dmark 2001 SE, it performed significantly better, achieving a score of 18,106, which suggests that older games will run perfectly.

In our battery tests, it performed reasonably, though it could have been better. We used a worst-case scenario test, which loops a DVD to drain the battery. This test utilises the optical drive, CPU, screen and speakers, and the Znote lasted 77min.