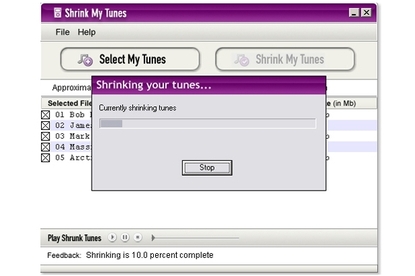 ShrinkMyTunes is a nice idea, but we do have doubts about the drop in quality of the sound. Having said that, ShrinkMyTunes does offer a full 14-day money back guarantee, so it's worth having a go to see whether you find the results acceptable or not -- after all, you could save yourself the cost of a new hard drive or iPod.

ShrinkMyTunes will make your digital music files smaller, to prolong the life of your iPod.

It has never been cheaper to pile on the gigabytes, but storage space is still something we want to hold on to where possible. After all, our many video and audio files consume plenty of room, so anything that allows us to increase digital storage space without buying a new hard drive or flash drive has to be good -- especially in the case of an iPod portable music player. Increasing the capacity probably means buying a whole new model. That's where ShrinkMyTunes comes in.

The concept is simple. ShrinkMyTunes takes any existing MP3 audio file (WAVs are also supported, and other audio formats should be added in the future) and converts it into a new and (generally) smaller version.

The ShrinkMyTunes patented compression technology (developed by a team of hungry NASA scientists) supposedly cuts down the file size (by up to four times) without affecting the quality of the audio. And it's really as simple as that.

As a matter of fact, we would have been happier had the interface itself been a little less simple. You point ShrinkMyTunes at the location of your MP3 files and, if they're scattered across a number of sub-directories, the whole lot tend to get clumped together.

And they're all selected as default, with seemingly no way of selecting just one file without deselecting all of the others first. However, we're sure ShrinkMyTunes will be improved and refined over time. And it's nice having the option of overwriting the original file or saving the ShrinkMyTunes version to another directory.

So can ShrinkMyTunes really reduce the size of your MP3 collection by 75 per cent?

Well, that all depends upon your musical tastes. In the case of a typical modern rock or rap album (Franz Ferdinand, Kanye West etc.), we found the original files to be 3.2-3.3 times larger than the versions that had been converted using ShrinkMyTunes.

The same went for a hard-driving Art Blakey jazz album. Indeed, pretty much anything with strong drums should struggle to muster more than 3.5x. Something a little softer, such as David Gray, could be reduced by around 3.8 times.

On the other hand, an album of 19th century operatic arias comfortably hit 5.3x, and a CD of Bach's Goldberg Variations for the piano could be reduced by an impressive 6.3 times. A typical 20-something, then, should be looking at upping their storage space by 3.2-3.5 times using ShrinkMyTunes. That's rather useful if you want, in effect, to turn your 4GB iPod nano into a 12GB to 14GB version.

But what about the audio quality? Well, here ShrinkMyTunes is a little less impressive we're afraid. Listen to the files on their own and the results sound pretty good. However, run them alongside the originals and the differences become more noticeable.

Most of the tracks ShrinkMyTunes has, well, shrunk sound as though they're being played inside a large tunnel, and background noises (the odd cymbal, for instance) tend to sound less distinct.

There are occasions when ShrinkMyTunes actually improves upon the original (hissing can disappear, for instance) but, mostly, you're losing a bit of detail and having to settle for slightly muddy sound. Granted, none of these defects will stop you from enjoying the music, but you could instead dramatically drop the recording quality of your MP3 files and look to make similar file-size gains that way.