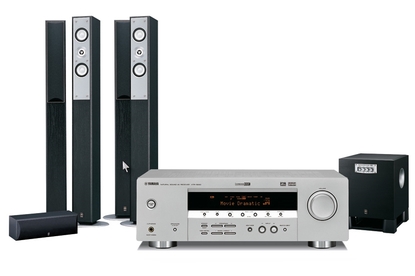 Yamaha's YHT-475B is a mid-priced home theatre system offering a good range of customisation for the budding enthusiast. What it lacks are next generation features such as HDMI connectivity and automatic calibration microphones. However, for the user who doesn't mind manual tinkering, and whose primary concern is sound quality, the YHT-475B makes a good buy.

Sound is paramount for any home theatre system, and in this regard the YHT-475B didn't disappoint. The 5.1 system comes complete with four tall floor-standing surround speakers and a smaller centre speaker. A somewhat petite floor-firing sub-woofer completes the package. We were very impressed with the large, room-filling sound given off by the five satellite speakers, as the dual woofers they contain are only 8cm in diameter.

Bass was rich and varied both with or without the sub-woofer engaged, though still a little muddy in pieces with complex low frequency sound. The upper tonal registers sounded spot on, and we heard little trace of distortion. Testing the system across multiple genres of music really showed how the YHT-475B was just as suited to the classical strains of Bach as it was to Eminem's The Real Slim Shady. The system also performed well with respect to volume. When we cranked up the bass on tracks from the Chemical Brothers we literally had the cabinets in our room shaking.

Moving on to movies, we were again impressed, for the most part. The battle scene from Troy involving Hercules and Hector was especially involving, with the flick of swords ricocheting effectively around the surround speakers. Other scenes, such as fireballs rolling into the Greeks' camp, were a good test of the subwoofer. The multiple explosions sounded powerful and deep, though the sub showed it wasn't so good at the subtle nuances of low frequency sound.

Gamers are also well catered for, with dedicated sound processing options for use with games consoles. We connected up the Playstation 3 and had a go with Ridge Racer 7. The whole experience was far more involving with the screech of tyres behind our heads and the thumping soundtrack pounding out from all directions. Gaming really isn't complete without a decent surround system.

Of course sound quality is only one part of the equation, and it's just as important to have a decent receiver too. While the AV receiver Yamaha has bundled (the HTR-5930) has a good range of features, it's far from being exceptional.

Firstly, there's the range of input connections. Yamaha has included multiple Composite and Component connectors, but there's no sign of HDMI, or even S-Video. With the multitude of HDMI compliant devices hitting the market, such as the aforementioned Playstation 3, this is a disappointing exclusion. In the case of the Playstation 3, we were forced to connect the console's sound by using an optical cable, of which there are two inputs. This isn't all that many, and with only one coaxial input, people with lots of digital audio devices may be left lacking.

One other disappointment is the lack of an automatic calibration microphone. These handy little devices plug in to the front of receivers, and using an onboard setup process, tune in the speakers to all the correct settings. These are almost standard now on most systems, so the lack of one here is a little surprising. However, Yamaha has included a wealth of setup options for those that want to customise the sound, including a whole range of sound adjustments for speaker distance.

Accessing all these options can be a bit of a chore, however, as Yamaha has spurned the use of an on-screen menu. Instead, the user is supposed to contend with the one-line LCD that adorns the front of the receiver. This can make adjusting the settings a little difficult without the aid of the manual. Thankfully all the most important settings have dedicated buttons on both the remote and the main unit. This includes bass and treble adjustments, selecting input devices and accessing sound processing.

When it comes to sound processing, Yamaha has thrown in all the regulars such as Dolby Digital, DTS and Pro Logic II. Yamaha also uses its own proprietary "cinema DSP" processor which allows for additional options with specialised sound for sports, video games and various kinds of movies. There are also some unusual options which supposedly recreate the acoustical ambience of some famous American music clubs. We weren't feeling the music to that degree, but the wide range of options is a nice inclusion.

Overall Yamaha has done an excellent job in crafting a good-sounding system with plenty of audio functionality. What's disappointing is the omission of some features that we have come to think of as standard.