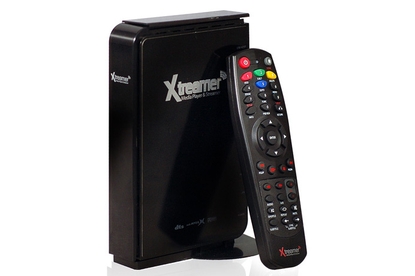 The Xtreamer media streamer is a low-cost option for anyone who wants to play their collection of digital video files collection on their big screen TV. It's not as feature-packed as some other media streamers we've tested, but it's a good choice given its low price.

The Xtreamer is an inexpensive media streamer that lets you display standard- and high-definition video, audio and photos from your PC on your television. It functions well over a wired Ethernet network and plays files over USB; wireless networking and an internal hard drive are optional extras.

The Xtreamer media streamer is well constructed, using a combination of painted metal and black plastic. It was smaller than we expected. It's shorter and shallower than a DVD case will easy hide away near your television or in a home theatre setup. We were a little confused as to how to orientate the Xtreamer — promotional pictures show it standing up, but this blocks airflow to the internal fan. The fan is quite noisy, though its speed can be adjusted.

The rear of the Xtreamer is where all the action happens. Two host USB ports can handle an external hard drive or the optional 802.11n wireless adapter, while a smaller USB slave port allows direct PC connection. Composite video and analog audio ports mean older devices can be connected, while optical digital audio and an HDMI 1.3 jack allows a high-def TV to easily display 1080p content. The package is rounded off with a 10/100Mbps Ethernet port.

After powering on the media player, a simple menu system appears. It's responsive and easy to navigate using the included remote control, but it isn't the prettiest we've seen. We didn't encounter problems when setting up a wired network connection, nor when using the 802.11n adapter (RRP: $29.90) to connect to a high-speed wireless network.

Playing video, audio and photo content off an external USB hard drive was flawless. We streamed a high-definition, 1080p MKV file without any noticeable buffering or stuttering issues. Picture quality is as good as we expected, with crisp detail and smooth frame rates at the highest resolution. Although we didn't test it, we'd expect playback off an internal hard drive — the Xtreamer accepts 2.5in SATA drives — to be equally seamless. When streaming files over a wireless network the Xtreamer took a few seconds to buffer, but there were no slip-ups during playback.

Codec support is extensive. Almost any commonly use format should play successfully on the Xtreamer — we tested MKV, AVI, MOV, FLV, MPG, VOB and AVCHD containers with no issues. The Xtreamer also has limited Internet access, letting you access YouTube videos, Picasa Web albums, some streaming radio services and other content. While it doesn't hold a candle to a properly set up media centre PC, it's a useful feature. The Xtreamer can be purchased from a range of resellers — we got ours from HDCity.