Lunar was originally released on the Sega CD way back in 1993, and earned a fan following thanks to its classic hero-coming-of-age story 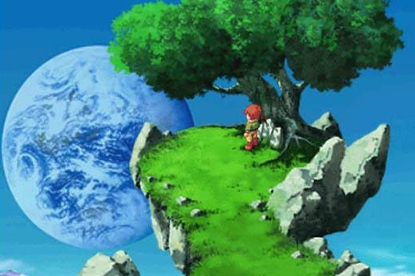 This revamp of GameArts' classic JRPG may boast gorgeous updated graphics, but at its core, its still very much the same Lunar: Silver Star Story that's been released and re-released multiple times on the Sega CD, Sega Saturn, Playstation, and GBA. That's good news for longtime fans, but it's also disappointing because with just a few tweaks, this version could have, and should have, been the definitive version of a much beloved classic.

Over the course of writing this challenging review, I've come to realize just how much Lunar has in common with Final Fantasy IV. That might seem odd to say, but hear me out, folks -- both games were originally released at a time when RPGs were still a niche genre, both have endearing stories full of melodrama and memorable characters, and both have been remade numerous times over the years. The latter point is particularly important in this case; fellow reviewer Jeremy Parish of 1UP lamented in his Final Fantasy IV DS review that there is no one "definitive" version of the game that can be recommended above all others. As I played Silver Star Harmony, I had the same feeling -- the game outdoes previous editions in many areas, but also has numerous faults that keep it from being the Lunar to play.

Lunar was originally released on the Sega CD way back in 1993, and earned a fan following thanks to its classic hero-coming-of-age story, colourful cast of characters, and pervasive humour. Alex's quest to become a Dragonmaster has since become one of the most remade RPGs, seeing releases on the Saturn, Playstation, and GBA. There's been fan dispute over which of these is best, with many still arguing that the Sega CD original has an innate charm that the tweaked remakes simply lack. Silver Star Harmony aims to go above and beyond all previous revamp efforts; it features story and gameplay elements selected from each version of the game, along with completely redrawn 2D graphics, new music, new voice acting, and several new story sequences (including a brand-new playable prologue).

And make no mistake about it: Silver Star Harmony looks great. The 2D sprites are large, lavishly drawn and animated beautifully, and the backdrops are equally impressive. The music is also excellent, though the all-new voiceovers are inconsistent, ranging from "good" to "ow my ears." But with these perks comes an addition nobody wants: excessive load times. Each setting transition takes five seconds, accompanied by a slooooow fade-out/fade-in effect. That doesn't sound like much, but there are transitions everywhere in Lunar; just wandering around town adds minutes of loading onto playtime.

What might also turn off some newcomers is the overall flow of the game. Lunar's pacing in terms of story development, exploration, and combat could be best described as "leisurely." Dungeons take a while to probe, dialogue exchanges are amusing but lengthy, battles are numerous and timely even if you auto-battle your way through most of them (due to the elaborate character animations and movement), and the story doesn't deliver any sense of threat or tension until you're a good ways into it. This factor has more or less been a constant throughout the numerous remakes, and it's one of the elements of Lunar that doesn't hold up as well against more contemporary entries in the Japanese RPG genre. Add the aforementioned load times onto this and you have a game that occasionally feels stuck in mud.

Those complaints might sound pretty damning, but the fact is that the core game is still excellent. Lunar is undeniably one of the best JRPGs of its day, filled with vivacity and liveliness to its setting, character, and dialogue that stood in sharp contrast to many of the stilted, dull settings and conventions that typified the genre at the time. There's a genuine heart to the characters and narrative that shines through despite some of its now-clichéd plot elements and archetypes. There's also actual challenge to the game -- you can use auto-battle to plough through low-level enemy grunts, but tougher foes will require more strategy than "buff a lot and keep casting spells to hit enemy weakness." The only real problem with that is... I just described almost every other version of Lunar. Why would you pick this one, then? The graphics, maybe, but with them come the aggravating load times and the hit-or-miss voiceovers. One could also argue the merits of XSEED's new English script against Working Designs' old efforts, but that's another huge can of worms best left unopened.