A quality tab crammed into 7.9-inches 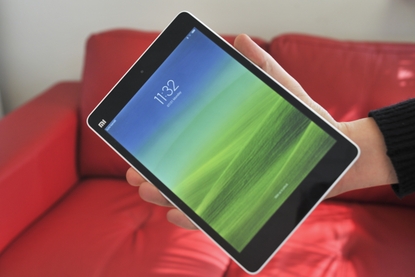 Xiaomi’s first tablet is a work in progress. The software on the MiPad is a far cry from the comprehensive offering found on the company’s smartphones, while the limp connectivity puts the rookie tablet at a disadvantage.

Xiaomi has made a name for itself in the global market by delivering premium products without the discriminatory price tag. Now the Chinese company is entering the tablet market with the MiPad, a 7.9in tablet with a high resolution screen, powerful GPU and proficient camera.

Xiaomi has copped a lot of slack for imitating the design of Apple’s iPad. The comically named MiPad does nothing to assuage claims the Chinese manufacturer is ripping off Apple’s formula for success.

Tell-tale signs nod to this being Xiaomi’s first tablet

Front on the MiPad is a splitting image of Apple's iPad, save for the presence of the Apple home button. Three capacitive buttons common to Android devices line the bottom of the display — the centre ‘home’ button even dons the soft-cornered square found on iPhones and iPads.

The back of the MiPad tells a similar story. A high resolution camera sits in the top right hand corner while stereo speakers — marked by perforated grilles — adorn the bottom of the tablet. ‘Mi’ markings and charging ports too are arranged in the same fashion as they are on an iPad.

Xiaomi’s tablet is largely differentiated from Apple’s tablet by using a glossy plastic for the casing. Bright colours add a touch of individual expression while masking the MiPad’s casing.

From hereon the MiPad boasts premium components, starting with the screen. The IPS LCD display spans 7.9in and has a high 2048x1536 resolution. The result is 324 pixels being packed into each inch, and that’s in the ballpark of Apple’s 326 pixel-per-inch retina display.

Find content high enough in resolution and the screen will impress. Photos and videos are sharp and the backlight is strong enough to make the tablet useful when out and about.

MiUI on a big screen

Drawing big crowds to Xiaomi’s products is the company’s MiUI Android overlay. Ontop of Android 4.4 KitKat is the older MiUI version 4. The generation-old overlay has been redesigned to suit the tablet form-factor. Although the software moulds well to the larger screen, tell-tale signs nod to this being Xiaomi’s first tablet.

Deficient support suckles the appeal from the Xiaomi tablet

The MiPad’s homescreen is organised into two sections: screens to the right act as an application draw, while screens to the left can be dressed in widgets. The widgets are aesthetically designed for the tablet form factor, but unfortunately only five such widgets are available. This deficient support suckles the appeal from the Xiaomi tablet; it’s only salvation lies in the company’s ongoing software updates. Xiaomi has proved with its Mi3 support will be strong, but there’s no guarantee its less popular tablet will benefit from the same ongoing investment.

Similar small gripes further undermine the experience. The music player doesn’t display albums and won’t organise your collection based on folders, and stock wallpapers don’t cover the entire homescreen. Not doing so causes letterboxing on either side and fails to take advantage of the MiPad’s proficient screen.

The MiPad’s slender body encases reputable hardware. Inside is a 2.2GHz quad-core CPU from NVIDIA, a 192 core ULP GeForce Kepler GPU, 2GB of RAM, a 6700mAh battery and internal storage options of 16GB or 64GB. A microSD slot on the side of the tablet can expand storage by a further 128GB.

Limp connectivity is a thorn in the MiPad’s thigh

This hardware cocktail serves the MiPad well by sifting through the software quickly, juggling multiple applications and by delivering a fun gaming experience.

Internet addicts will be disappointed to realise no version of the MiPad is compatible with a SIM card. The tablet is well versed in Wi-Fi by supporting dual-band 802.11ac and Wi-Fi direct. Bluetooth 4.0 is also featured, but there is no in-built GPS receiver or support for near field communications (NFC).

Limp connectivity is a thorn in the MiPad’s thigh. Google’s Nexus 7 makes fewer concessions and undercuts the MiPad on price, as does Asus’ MeMO Pad range of tablets.

The 7.9in form factor strides a fine divide between tablet and ludicrously large smartphone. The ambiguous size might not bother some who want to use the MiPad to take photos. Given the rich screen and plausible stereo speakers, it makes sense that the MiPad have decent photographic credentials.

The MiPad has an 8 megapixel rear camera capable of 1080p recording and a 5 megapixel front facing camera. Photos captured with the rear camera have rich colours but compromise on detail due to a large amount of image noise. The lack of a flash and HDR mode causes the camera to struggle in dimly lit environments. Like most tablets then, the MiPad’s cameras are more of a contingency plan than your primary shooter.

Read more: Xiaomi's Mi4 brings a touch of Apple to the open world of Android

Xiaomi’s first tablet is a work in progress. The software on the MiPad is a far cry from the comprehensive offering found on the company’s smartphones, while the limp connectivity puts the rookie tablet at a disadvantage.

A stunning screen and complementing stereo speakers make this tablet an ideal buy for the rabid multimedia user, but in Australia, where local resellers quote a $399 purchase price, there are too few reasons to justify the MiPad over Asus’ $100 cheaper Nexus 7.