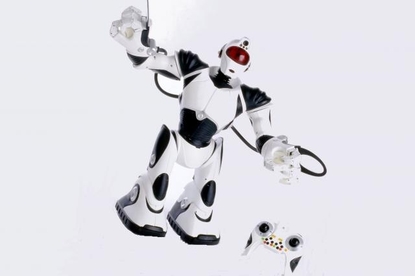 Do you like robots? (silly question really) Do you have a little spare cash? Then why are you still here?

Words cannot describe the joy on our faces when we walked into the back room to be greeted by a robot. It is the kind of start to the day every kid dreams about. Affordable robotics have been a hot topic of discussion for decades, since TV shows like 'Transformers' first opened our minds to the ideas of what they may be able to do. Over this period of time, toys have, to varying degrees, captured some of these ideas, utilising elements of talking, moving and environmental interaction. The Robosapien combines all of these and takes them to the next level.

The unit ships with a remote control, reminiscent of the Xbox game pad, and the face is absolutely littered with buttons. There are two thumb-sticks, two sets of four face buttons, as well as four shoulder buttons. All of this makes for quite a daunting experience out of the box.

Once you spend ten minutes with the manual however, it all begins to make sense, and the confusion just melts away in a blissful blend of witty robot one-liners and awestruck co-workers. This thing can pretty much do all those things you've dreamed about. It can walk at different paces, and can acquire a target (directed with a light from the top of the remote) to move towards. It even has optical sensors to determine when it is about to run into something and corrects its path accordingly.

That is not to say movement is perfect. The biggest annoyance we had was that the Robosapien cannot walk diagonally. To turn he must stop and rotate in a circle till he is facing the appropriate direction, then continue his march forwards. Being able to designate a direction and have him continue forwards at the same time would make movement much more fun. We also found him a little slow for the sort of pranks and general fun we were trying to have with him, so a small speed increase wouldn't go astray.

All four of its limbs, as well as its head and torso can all be manipulated using the second thumb-stick. This includes the ability to pick things up at two different heights and to throw them. The highlight of our time with the Robosapien was when a colleague placed a toy dog in front of it. Robosapien contemptuously picked up the poor creature, crushed its head and threw it away. We would have liked the optical sensors to extend to the limbs as picking things up is extremely difficult in general, and has more to do with the actual position of the robot in relation to the item than control of the hands. The ability to sense nearby objects on the floor and move the arms towards them would take this toy to the next level.

The Robosapien has other features that simply fall into the "cool" category. He has a lot of preset moves, our favourite being the dance feature, in which he bops along to a variety of songs and even at one point does - you guessed it - The Robot. He also has the ability to pick himself up after a fall onto his back, which is definitely a sight worth seeing.

Even the recorded voice tracks are of a high quality. One would expect them to get annoying after a short period, but many of them are genuinely funny and we found they added to the experience.

One of the best things about the Robosapien is that it still manages to be an affordable package. We can see this being a big hit come Christmas time, as the sub $200 price really puts it within reach of most families. Just be sure not to let its optical sensors come in contact with any toy canines or you could have a bloodbath on your hands.