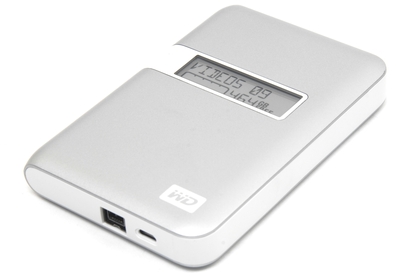 Western Digital charges a premium for its flagship Mac-formatted external hard drive, but the addition of an eInk label and the faster FireWire 800 interface make it a worthwhile choice of you need to transfer large files.

Mac users rejoice: Western Digital has finally upgraded its My Passport external hard drive range with a FireWire 800 interface. This means faster transfers, though the considerably thicker enclosure is a slight trade-off for Nudie-wearing hipsters.

The biggest difference between Western Digital's Studio-branded external hard drives and the company's Essential models has traditionally been connectivity. The WD My Passport Studio offers up both USB 2.0 and the speedier FireWire 800, while the Essential models only have the former. As we noted with the My Passport Essential SE, WD is using micro-USB ports, which are allegedly sturdier than starndard USB ports but the cables can be more annoying to replace.

FireWire 800 is a great inclusion if you have a compatible device; it has a theoretical maximum bandwidth of 800 megabits per second. USB 2.0 is restricted to 480Mbps. It's also known to have a higher average throughput when transferring large files, which should mean faster overall performance using the interface. Western Digital even includes a FireWire 800 to 400 adapter, which means you'll be able to use the connection with older Macs and Windows PCs like the HP Pavilion Slimline S5380a.

The downside, though, is that FireWire 800 is a large interface, which means the My Passport Studio is bulkier than it would be otherwise. It's even slightly thicker than the higher capacity My Passport SE, so it might not fit in small pockets so easily.

An unusual feature of the WD My Passport Studio is its electronic label, which is like the one found on the My Book Elite. The eInk display is similar to the screens of e-book readers like the Amazon Kindle, and essentially acts as a capacity gauge and volume label. You can change the label with the bundled Windows and Mac-compatible WD SmartWare software and it can stay visible without power for six months. If you have multiple external hard drives, you can label what each one is used for.

Western Digital doesn’t include any formatting tools, so if you choose to change between Windows and Mac file systems, you’ll have to do it the old-fashioned way. Thankfully, all bundled software is protected on the drive; if you do format, you won’t lose any of the utilities like you would on the Hitachi SimpleDRIVE Mini.

The bundled WD SmartWare software acts as a configuration hub for the hard drive, letting you configure the eInk label and manage the 256-bit AES hardware encryption and backup schedules.

WD SmartWare's backup utility is, like the HP SimpleSave Portable, designed to be intuitive and largely automatic. After categorising data on your computer and the external hard drive based on file extensions, WD SmartWare lets you choose which types of file formats to back up. While certainly simple, it doesn't let users set custom extensions, so obscure formats are simply be listed as "other" and bundled with miscellaneous system files. WD SmartWare supports up to 25 sequential backups of the same file, though the scope of configuration isn't as great as that offered by the BlackArmor WS 110.

The My Passport Studio is an average performer when using the USB 2.0 connection, and you can expect similar results when using the FireWire 400 adapter. However, the FireWire 800 interface means you’ll be able to transfer large files at a much faster rate.

While we’re not convinced that an eInk label is useful on a portable hard drive, the FireWire 800 interface is certainly a godsend for Mac users who want to transfer large files regularly. Power users may want to invest in a better backup suite, however.