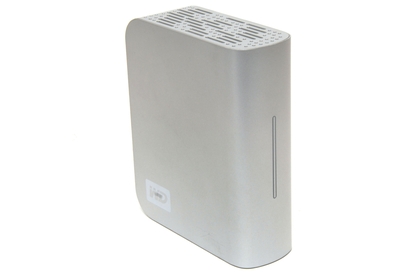 This drive is primarily aimed at Mac users, but it can be adapted to work on PCs. It's a capacious and fairly inconspicuous drive, but we do wish it was supplied with a full version of its backup software, instead of a trial, and that WD would include an eSATA cable.

Western Digital's My Book Studio caters primarily to Mac users, but it can be used on PCs, too. It's a versatile drive, which can be plugged into any computer thanks to the inclusion of four different types of interface connections.

Its fastest connection is eSATA, but it also has USB 2.0 and two types of FireWire. Those of you with FireWire 800 ports on your computers can use this interface, which can provide double the throughput of regular FireWire 400 connections.

A single hard disk inside the Studio Edition's plastic exterior is what supplies the Studio Edition with 1TB of space (931GB when formatted in a Windows environment), and it means that this drive can be used as a backup device or simply as a dumping ground for large multimedia files and documents. It only ships with backup software for Mac, but PC software can be downloaded from WD's site.

The drive is formatted for a Mac by default (using the HFS+ file system), so to use it under Windows, it must first be re-formatted. This can be done through Windows' Disk Management tool, and it will obviously wipe all the data on the drive. Unfortunately, the drive doesn't ship with a software CD, as its software is stored directly on the drive (in any case, only Mac software is stored on the drive). The drive must be registered on the Western Digital Web site in order for Windows software to be downloaded. As such, it's not an ideal drive for PC users. If you're after an external drive for your Windows PC, then one formatted for Windows by default and which ships with Windows software is a better option.

Nevertheless, if you're prepared to go through the reformat and download process for a Windows PC, you'll be able to use WD Anywhere Backup (albeit a 30-day trial version, a full version will cost you a further $36.55) to keep copies of your local files on the external drive. WD Anywhere is made by Memeo and it's fairly easy to use: simply select the folders or drives that you want to back up (you might have to remove them from the exclusion list if they are not on the C drive) and select the My Book Studio as the destination. It'll perform backups in the background, which will use up only between 1 and 4 per cent of the CPU, but while this will let you use your PC comfortably while you backup, the backup will take longer to complete.

As far as performance is concerned, the drive wrote and read data from our test PC at rates of 31.30MBps and 33.22MBps, respectively, when using FireWire and at 31.88MBps and 28.93MBps when using USB 2.0. When using these connections, the drive will also automatically power down whenever the PC is switched off, which is convenient, and this worked perfectly in our tests. Unfortunately, it can't automatically power down when eSATA is used.

The drive ships with all the cables you need to get started, except for eSATA, which is a little perplexing as the onus is on the hard drive manufacturers to supply this type of cable with their drives. In any case, eSATA isn't widespread yet, and USB and FireWire are. The bottom line is, if you're in the market for an external drive for a PC, there are better options available than this one. If you're in the market for a drive for your Mac, then go for it.