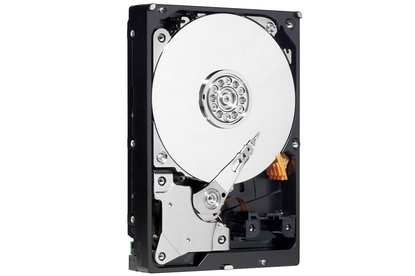 The slight lag in performance shouldn't be enough to deter people who have large data libraries from getting the WD Caviar Green 2TB WD20EADS. Nor should it put off casual and professional digital media enthusiasts, who will rightly crave this drive. For these audiences, the price and performance trade-offs are a small price to pay for the honour of packing a 2TB drive inside.

The Western Digital Caviar Green 2TB WD20EADS hard drive boosts the capacity game to a whole new level. This $469 drive crams 2 terabytes into a single drive — making this drive a boon to anyone with a large data archive, multimedia library, or space-hogging video collection.

We've used words like gargantuan and massive before to describe the capacity of a hard-disk drive, but this model blows all other examples away. Western Digital is the first drive maker to achieve 2TB in one drive. The previous top honours for capacity went to the Seagate Barracuda 7200.11 1.5TB.

This capacious internal drive provides an area density of 400 gigabits per square inch on four 500GB platters. The drive is also part of WD's Green Power line of hard disk drives, billed as environmentally friendly drives due to their lower power consumption.

In our PC World Test Center benchmarks, the 2TB drive came in fifth place among all drives tested — one better than its nearest-capacity competitor, Seagate's Barracuda 7200.11 1.5TB. Its performance was above average and bettered that of its sibling, Western Digital's Caviar Green 1TB WD10EACS, which finished ninth overall in our performance tests.

This model lagged behind our performance leaders (the Western Digital RE3 Enterprise 500GB and the WD VelociRaptor (WD3000GLFS)) on some results — most notably, the write-intensive disk imaging test that we perform as part of PC WorldBench 6. On other core metrics, though, the 2TB drive performed very competitively. For example, it completed our "write files and folders" test in 112 seconds and our "write large files" test in 92 seconds. On each of those tests, its results were off those of our performance leaders by a dozen seconds or less.

The 2TB drive has several WD technologies inside that the company says enable this model to achieve its balance of price and performance. StableTrac reduces vibration by securing the motor shaft at both ends, and this in turn permits accurate head tracking during read and write operations. IntelliPower, according to WD, adjusts the balance of spin speed, transfer rate, and caching algorithms for optimal balance between performance and power consumption. IntelliSeek optimises seek speeds to enable lower power consumption, noise, and vibration. And WD's NoTouch ramp-load technology keeps the recording head from touching the disk media.

The storage fiend in me salivates at the thought of 2TB in a single 3.5-inch hard-disk drive. Such a high ceiling on capacity means that I no longer need to make choices about where I'm storing my data; instead, I can better organise and consolidate my data across multiple subjects. But even though I like the idea of consolidating my data under a single roof, I shudder to think what the costs to recover a ginormous 2TB drive might be if anything should go amiss.

I also admit that, at first blush, the 2TB model's $469 price tag gives me pause. That is, until I realised that its 23c per gigabyte cost is actually fairly competitive with that of other drives on the market; the only difference is that this particular drive's super-sized capacity skews the upfront costs accordingly.