Back up data online 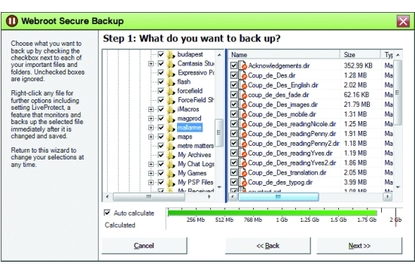 Webroot does a good job and is simple to use. The price is decent (although Carbonite offers unlimited storage for a similar amount), but Bullguard’s interface is much cleaner and still remains the software of choice in this area.

Storing important files online has become a useful option for home and small business computer users, and Webroot Secure Backup is the second such product to be reviewed in as many months, the last being BullGuard Backup 8.0.

The fundamentals of such programs are very similar: software installed on your hard drive integrates seamlessly with storage space on a remote server so that files can be transferred automatically off site. This means that should something go disastrously wrong with your PC, those files can be restored without the worry of checking whether data on other storage media (such as writeable DVDs or an external hard drive) is still secure.

That said, as with Bullguard and a number of other programs, Webroot also provides users with the ability to backup to a variety of local media, and the simple interface provides the option to save files locally or online. An added virtue of the latter is that files saved to the remote server can be accessed anywhere — all you need to do is log into your account. Once an initial backup has been made, incremental changes can be made and automated to take place monthly, weekly or hourly.

Webroot uses secure socket layer (SSL) technology to transfer encrypted data to the company's server, so there should be no problem at all with the integrity and safety of backups, and like Bullguard Backup 8.0, a single licence can be used on up to three separate PCs. Prices for a yearly licence begin at $29.95, but as this provides only 2GB of storage it may not be that useful for the majority of users. A more effective service is likely to be provided with the $49.95/year subscription for 10GB, which is closer to Bullguard's pricing.

One area where Webroot does not compare as well is in terms of its interface: mostly this is a question of aesthetics. Although the program works very well with Vista, it simply does not look as slick as Bullguard. In many respects, this is fairly minor, and certainly the program is very easy to use, but an overhaul of the front end would simply make it appear a little more professional. It is functional rather than attractive.