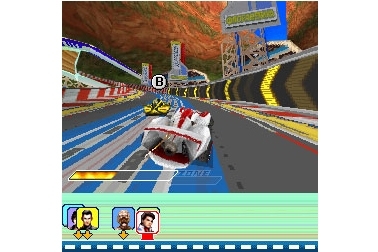 It's somewhat mindless fun, but it's still fun.

Despite sounding absolutely ridiculous on paper, there is something fun about "car-fu." And not only that, but when I say "car-fu" I'm talking about the crazy vehicle martial artistry exhibited by insanely fast cars with a set of Jump Jacks and some very agile wheels; i.e., cars from this spring's Wachowski Brothers family flick, Speed Racer. This means that yes, Speed Racer: The Videogame is a movie license game you can buy for your nephew cringe-free.

Apparently if you don't know these characters it's your own fault, but all they're here to do is compete in the World Racing League circuits, so it doesn't matter. The WRL comes in three difficulty classes based on speed and enemy feistiness, each with its own lay-out of the 19 tracks. As you advance, you'll eventually unlock arcade modes for time trials, stunt runs and quick battles. If you can gain enough fans via mad skillz in the trick department, you'll also gain access to new car models, fresh paint jobs and, eventually, all 16 playable drivers.

Car-fu. This is what sets Speed Racer apart from other racing games — the ability to literally jump on top of another car to mess them up. Hit the B prompt near an opponent to slow down time (you can even take your thumb off the gas if you like) and then perform a bit of quick-time magic to pull off the crunch. Just hit X or Y as the icon slides over the sweet spot — harmless! In medium and hard difficulty, you get sent to the same screen to dodge enemy attacks.

A more immediate car-fu manoeuvre is a spin mapped to the X button. It's useful not only for knocking around your opponents, but also for recovering from a weird trick landing or a bad drift. Tricks and drifts are excellent, in turn, not only because they make the girlies swoon, but because they fill your boost bar and can send you into the invincible "zone."

Mach 5 in your pocket

All told, Speed Racer: The Videogame is a forgiving, kid-friendly experience. Any times I somehow fell off the course were balanced by the times I probably should have, but didn't. Since you never actually explode, it's pretty much mindless fun, even when dealing with AI that always seems to manage to catch up. It's too bad there's no downloadable multiplayer option, but up to five can join in with their own cards. For those not quite willing to pop for the Wii Wheelin' version or who need their Speed on the road, the DS game holds its own.