Looking for something faster than Mario Kart Wii? 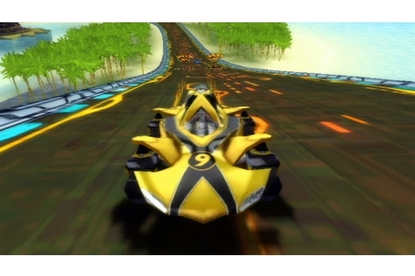 Only being being able to have two players is a pity, but the game is generally fun.

I'm sure anyone with a taste for combative racing is deep in their quest to unlock everything Mario Kart Wii has to offer, but if you're looking for something faster, with a lot more car-fu, Speed Racer: The Videogame is surprisingly recommendable.

Competing in the World Racing League's 18 championships involves navigating brightly coloured ribbons of loopy, twisty, Mobius strippy track just like you probably saw in the movie trailer, but also bashing the hell out of your opponents. Car-fu is definitely the most interesting part, as you won't find many gimmicks in the tracks to distinguish them, even though the locations are diverse. It's satisfying to see cars flipping down the track or spiralling off a jump after taking a particularly "hyper" round house to the windshield.

Best of all, though, is the fact that the whole game is motion-controlled, without even the option for analogue. We can hear the precision-obsessed, anti-Wii Wheelers whining already, but once you start jerking the remote horizontally to shunt your opponents into a wall or pulling up for a barrel roll Jack Jump turned spinning Torpedo attack by a boost, you won't miss your thumb on the stick. Hardcore racing fans may find the compensational auto-steering unnecessary, but it doesn't interfere with your inputs, and in fact, you may be glad it's there when you use a quadruple-stacked boost to enter "the zone" for invincibility and tons of extra speed.

Leave one friend in the dust (only one)

As you overcome the AI (who rubberband like a pack of rubber bastards) in championships by placing at least third, you'll unlock the 20 characters. To spice up rankings, there are bonus points awarded for having the fastest lap and causing massive damage, so you can win a championship without actually racing every race. Two players can compete in either single races or a full championship (with auto-saves between races!), but there's no head-to-head versus, most likely because it's just not as fun without all the carnage. Sadly, "multiplayer" is a bit of an overstatement, since two is all you get. Lack of online anything also holds the game back.

Maybe that's just expecting too much from a summer movie license. For what it is, with voiceovers from the actors, what I imagine is probably movie soundtrack, and some excellent-looking, swift racing with seriously fun combat stunts, Speed Racer: The Videogame is awesome. Popcorn game for a popcorn movie? Nothing wrong with that.