Virtualisation on the Mac has never had it so good 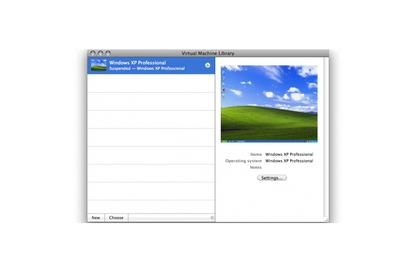 VMware Fusion 2.0 Beta 2 is certainly a beta release, but even so, it feels quite polished and well appointed. VMware has some heavy competition in Parallels, which has most of these features already, but Fusion 2.0 looks very promising.

Virtualisation on the Mac has never had it so good. There are several options available for running almost any x86-based operating system as a VM under Mac OS X, including Parallels, VMware Fusion, and VirtualBox.

If you like the fact that Macs are less prone to problems, viruses, and spyware, but you simply have to run a few Windows applications, it's a great time to be alive.

In that spirit, VMware has opened the doors to the second beta release of VMware Fusion 2.0, VMware's Mac desktop virtualisation package. There are more than a few new tricks in Fusion 2, including mirrored folders that map a folder on your host Mac to a folder in the VM, such as My Documents. Also nice is the new automatic snapshots feature, which can be configured to take a snapshot of the VM every 30 minutes, every hour, or every day, making rollbacks easy.

On the front end, there's support for video up to 1080 pixels in Windows XP or Windows Vista, improved 3D support, and the ability to play games in full-screen mode.

In Mac OS X 10.5 Leopard, you can even mount the disk of a VM without powering up the VM, which can certainly come in handy. Also new is the ability to assign up to four CPUs to a VM, support for the VMrun command-line tools, and the ability to run Mac OS X Server as a guest.

As far as performance goes, VMware claims to have spent lots of time and effort to reduce the overhead of VMs that are running in the background — that is, without focus. The company contends it has made strides in this area in order to decrease overall system load and to minimise the impact of running VMs that might be running only a single application.

We're running VMware Fusion 2.0 Beta 2 on the very MacBook Pro on which we're writing this preview on (a 17-inch model with 2.4GHz dual-core processor and 4GB of RAM). Inside Fusion we're running a CentOS 5.1 x86_64 guest and a Windows XP guest, and we're noting snappier performance of the overall system as well as the individual VMs.

We don't yet have any numbers to back that up, but quickly swapping between OS X apps and the VMs is, well, quite fast.

We have noticed a few oddities in the beta, such as somewhat sluggish NAT performance, and some desktop assignment issues with Spaces. Also, in Unity mode with Windows XP, the taskbar vanished, never to be seen again, even when explicitly called from the menu bar. This might also be a Spaces-related problem. In any event, this is beta code, and we're not holding it to the same standards as a final release.

On the plus side, the new Fusion beta found and booted our original Fusion VMs without a problem, and proved extremely helpful in installing new VMs, essentially handling the installation of Windows by itself as long as the install CD was in the drive.