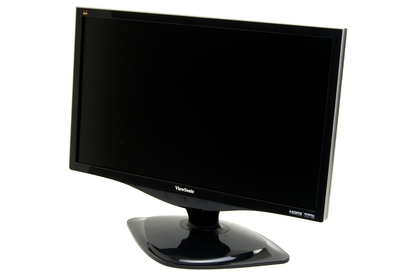 One of ViewSonic's more affordable monitors, the VX2433wm 24in LCD monitor has some image noise problems but otherwise provides good colour quality, a 16:9 aspect ratio and fast response times.

The VX2433wm 24in LCD display is part of ViewSonic's X series of LCD monitors, featuring a stylish design that catches the eye. The feature set and aspect ratio of this monitor is well-suited for games and movies, but the colour quality makes it a reasonable PC monitor too.

Design is certainly a striking aspect of the ViewSonic VX2433wm 24in LCD monitor. The display is surrounded by a thick, gloss black bezel which makes it look more like an LCD television than a computer monitor. The gloss can be particularly distracting, as the display is embedded quite deeply into the casing; resulting in any gloss reflected by the bezel being easily noticeable. During testing, we often mistook these reflections as an application notification in the Windows taskbar. Thankfully, the display itself is matte so provided you experiment with the monitor placement you can minimise the issue.

Connectivity isn't as plentiful as found on other monitors, such as theDell UltraSharp 2408WFP, but the choice of HDMI, DVI and VGA ports will suit most modern PCs and other devices. A line in audio jack provides a source for the integrated speakers, and there is a line out jack to connect another set of speakers.

The ViewSonic VX2433wm 24in LCD monitor allows for some vertical adjustment, but it can't be swivelled or adjusted in height. Viewing angles are sufficient but the display does lose contrast and colour fairly quickly when viewed from differing perspectives.

Many 22in and 24in LCD monitors have a 16:10 aspect ratio to suit a standard computer desktop, but the VX2433wm LCD monitor has a 16:9 aspect ratio, as well as a maximum resolution of 1920x1080 pixels, so it can also display movies and games in full HD.

The on-screen menu provides standard configuration settings including brightness and contrast. Colour temperature settings are measured in numbers (6500K, 9300K etc) and sRGB and user-customised colour temperatures are also available. In the manual image adjust menu, you can also enable or disable dynamic contrast, alter the response time, and even switch between RGB and YUV display modes. The YUV display mode provides a much higher contrast and higher quality image than the RGB mode when displaying content from game consoles and set top boxes over the HDMI connection.

In DisplayMate, the ViewSonic VX2433wm 24in LCD monitor performed adequately. Colours were slightly inconsistent, appearing vibrant towards the edges but often duller towards the middle of the display. Colour combinations didn't prove a hassle and there was nothing that was truly troublesome during tests. Unfortunately, text characters can often appear jagged and anti-aliased in several programs when viewed at the maximum 1920x1080 resolution; an effect that didn't occur in the same tests on the Dell UltraSharp 2408WFP. There is little to fault with the monitor's backlight, but some minimal bleed was noticeable on the bottom edge of the LCD monitor during deep black tests.

There are no issues with motion and no visible ghosting is apparent when viewing movies or games, particularly with the ultra fast response time setting on. Image quality isn't fantastic though; even with YUV mode on, the image was very noisy during movies. Though colour quality is acceptable and response time adequate for games, some movies are affected by this image noise.

The dynamic contrast can be slow to transition between backlight levels and can often take three or four seconds in some cases. However, unlike the AOC Zifas 2218Ph LCD monitor which made a sharp transition, the VX2433wm 24in LCD monitor slowly fades through these levels, for a noticeable but smooth effect.

Considering the price tag, the ViewSonic VX2433wm 24in LCD monitor does a good job. None of our criticisms will ultimately have a jarring effect on viewing the monitor, and the colour quality it does provide is sufficient for use as a small television or display for games and movies.