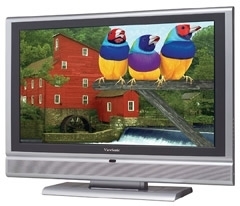 Don’t let the lower cost suck you in, this is an LCD TV to avoid.

When looking to buy an LCD TV there are a few things you would like it to do. Paramount is image quality and, depending on the TV, standard definition and high definition content should be reasonably displayed. While DVDs will always have some up-scaling artifacts, they should look good enough to be viewed comfortably from a distance. The Viewsonic N4060w fails miserably from every source device whether it is standard or high definition. A mess of ugly pixels, it's oversaturated, underperforming panel is painful to watch when viewing a DVD and just as abysmal when used with a PC.

From a design perspective, the Viewsonic is unattractive with boxed edges meeting smooth curves at odd places. The unit is also incredibly thick for an LCD TV; in fact one of the thickest we've seen in a long while. It has a wide range of connections though, with two components, two composite, a 15 pin D-Sub connector and even HDMI.

We tested the component inputs and were disappointed by the results. Images were washed out with oversaturated whites. Gradients didn't blend properly but instead awkwardly stepped in a series of heavy jutting increments filled with noise. White areas moving against black produced deep magenta fringing adding to the already problematic imagery. Overall, there was excessive noise, digital artifacts and combing on all images, from all sources and at all resolutions. Not only that, but colours tended to bleed into each other and lacked even the simplest definition between shades. It was disheartening to view this panel as we had such high hopes for it considering its price point. This is certainly a case of the common phrase "you get what you pay for".

We used Digital Video Essentials to test the component and HDMI connections and while the HDMI was slightly better and less saturated, it still wasn't overly useable. Since many of the test patterns we use are still images, the panel did reasonably well reproducing them. The minute we assaulted it with any kind of moving images the problems became obvious. The biggest confirmed what we suspected with respect to the colour stepping. As a moving colour gradient becomes darker the panel looses the ability to properly draw and blend the differences in the colour. This causes it to step to the next shade it can properly produce often jumping far too much and making an obvious line of difference between the two shades. In test patterns this looks horrible; when watching DVDs it becomes downright painful.

Since Viewsonic are renowned as a monitor company we figured that connecting the N4060w to a computer may change its fortunes. We were so very wrong. Using DisplayMate Video Edition we ran our extensive tests on the panel via PC. The geometry, distortion and sharpness tests all came up fine, which surprised us as the PC desktop looked average when first connected. However, the problems came hard and fast once we hit the colour block and gradient tests. These tests revealed the source of many of this panel's problems. Put simply, it doesn't do gray very well. Gray is an essential component of LCD technology as it is the building blocks used when creating shades in an image. The N4060w has issues displaying gray, excessively creating stripes of green and magenta discolourations which only get worse as the gray gets darker. The result is blacks that look green, image noise and other forms of incorrect pixel draw. The streaks in the gray scale extend to every other colour and cause a range of problems. The worst we witnessed was in the magenta and red scale chart which produced huge amounts of pixel noise and discolouration at regular intervals.

Since DisplayMate is comprised of only still images, we also ran Digital Video Essentials via the PC DVD drive and saw that the PC mode suffered the same problems as the other modes when displaying DVD.

We understand that this is a reasonably cheap TV especially for a 40-inch model but in our honest opinion you would be wise to spend that extra cash and get something that can actually display, at the very least, a DVD without so many visual aberrations. In good conscience, we can't recommend this product, even at its low price point.