App review: Wake up and smell the Vegemite 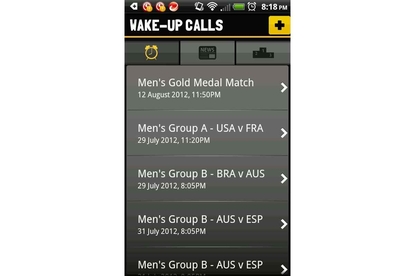 This free app from Vegemite allows you to set wake-up calls so that you won't miss any of your favourite events at the London Olympics.

There isn't long to go now before the 2012 London Olympics begin, and if you're still at a loss as to when your favourite sports will be shown live on TV, now's the time to get organised. With an Olympic TV schedule yet to be published by channel Nine, one easy way to know when your favourite sport might be on is to install Vegemite's Wake Up app, which is available for both Android and iPhone users (through their respective app stores).

This app can be used to set alarms for your favourite sports, which will sound at a predetermined time just before the event is about to start. Not all events will be on too late (some will start at the humane hour of 8.30pm, for example), but the app will come into its own for those events that are on well past midnight — 4am for weightlifting, anyone? Not without some Vegemite and cheese on Turkish toast!

To get you hyped before watching a game, (and to help wake you up, of course) Vegemite has enlisted the services of Laurie Lawrence to be one of the voices for the wake up call — you might remember him as the coach of gold medal-winning swimmer Duncan Armstrong at the 1988 Seoul Olympics (see the YouTube video at the end of the article). A few minutes before the event starts, the voice will come on either to remind you that an event is on (if you're already up), or to wake you from your slumber. The other voice is a fairly odd selection — it's comedian Dave "Hughesy" Hughes and we're not sure if he's ever coached anyone to Olympic gold. Perhaps his voice will be used for all the quirkier sports that are on the schedule, such as canoe slalom or badminton. From what we can see, you can't select the voice to wake up to.

Selecting which sports you want to watch is easy: simply click the plus sign at the top of the app, move the slider to set a wake-up call by sport, and scroll the list of sports to find the events that you wish to watch — for some sports, the medal games are the first in the list, but the lists are long and finding what you want to watch can mean lots of scrolling. For sports such as weightlifting, which is always a favourite, just having a general wake-up call for the sport would have been good; instead it lists all the different weight divisions, which means you have to set wake-up calls for all of them.

Vegemite could have been a little more helpful and separated events with Aussie representation to make them quicker to find. For example, finding Aussie Boomers basketball games means scrolling through the whole list of fixtures to find the Boomers match-ups. For individual sports, highlighting if an Aussie is participating would have been a good idea. Luckily though, the app will keep a tally of the medals that are won by Aussies, and there is a tab for sports news that mostly involve Australian athletes (it's from the AOC's data feed).

We hope that all the times for the events are accurate when it comes to channel Nine's broadcast, but previous Olympic broadcasts have taught us to never get our hopes up regarding the live coverage of most sports. Unfortunately, at the time of writing, channel Nine still had not released the TV schedule for the games. This could also explain why the app doesn't actually tell you which channel the events will be shown on (if at all) — the main channel, or one of the off-shoot digital channels. It doesn't matter though, it's still worth installing it and giving it a go. If anything, you'll be up when your favourite sport is on and will be able to follow the scores online, and if you're lucky enough, it might just be on TV, too.

Channel Nine says the coverage will be unprecedented and that there will be up to 17 hours of live footage per day. If waking up for it all makes you tired just thinking about it, then the "catch up" feature on Nine's Web site will be the way to go.