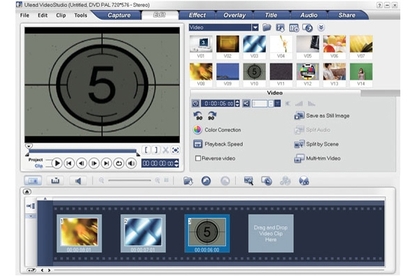 VideoStudio 10 Plus’ simplicity is its strongest point, but this doesn’t mean that it’s not a match for any other consumer editor currently on the market. If you’re new to video and haven’t got an editor, this is one of the best available.

Ulead's VideoStudio has always been a good choice for the novice video editor, and the latest version is no exception. As well as new features that bring it in line with its competitors, version 10 adds tools that will be well-received by the home video enthusiast.

Playing the same game as Pinnacle/Avid, Ulead (now merged with Intervideo) is releasing two versions: VideoStudio 10, and the Plus version reviewed here. Both look the same, but the latter now supports up to seven video tracks and HD video formats. This gives you greater creative scope in your projects and closes the performance gap between VideoStudio and editors like Adobe Premiere Elements and Vegas MovieStudio.

Other new tools include a reasonably effective stabilisation filter for shaky footage and a waveform view for tweaking your audio. More useful, perhaps, is the same smart proxy mode found in MediaStudio Pro, which lets you edit footage from HDV camcorders on a less-capable system. Unlike the surround sound in most consumer editors, VideoStudio 10 Plus also includes fully-fledged 5.1 Dolby Digital encoding, with a simple front end allowing you to set audio locations and balance for separate audio tracks.

One of Ulead's strengths has always been format support, and VideoStudio 10 Plus is no exception. As well as adding h.264 support for PSP and iPod video export formats, this editor now lets you import digital TV (DVB-t) recordings from your tuner card or Windows MCE. This enables another new feature, which is the ability to automatically detect and remove advert breaks from these recordings. However, we only found this feature to be hit and miss, requiring manual intervention to get them all.

There are a couple of new effects to play with, plus some new DVD templates, but the most eye-catching addition is the DVD transition, which creates motion segues between menus and content on your DVDs. Early adopters should also note that high-definition DVD burning (MPEG-2 HD/WMV-HD) is supported out of the box - the first editor we've seen that does this.