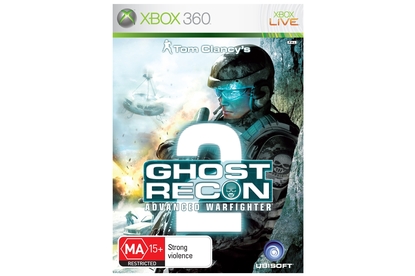 Although Ghost Recon: Advance Warfighter 2 won't reinvent the wheel, it zooms along at such an exhilarating pace that you're unlikely to care. Another worthy addition to the Tom Clancy pantheon.

Tom Clancy's elite warriors of the future keep on rockin' in the free world.

Whether you look to the future and see technology magically bringing an end to war, or a dystopian nightmare that would leave Orwell gasping for breath, there's no denying the appeal of playing with tomorrow's weapons today, in the safe, secure sandbox of a game.

Run for the Border

It's 2014, and Mexico is struggling to contain a rebellion on the eve of a new North American security agreement. Nukes go missing, and guess who's called in to clean up the mess? From the desolate wastes of the Mexican desert, to the streets of El Paso, Texas, you lead a squad of top tier soldiers who exist solely to execute the shadowy black-ops that Uncle Sam can't or won't acknowledge publicly.

The bulk of solo play is split between cracking open cans of hot whoop-ass, scanning for cover and ambush possibilities, and ordering around the squad you pick by hand at the start of each mission. Different warrior classes boast particular strengths and weaknesses: marksmen are great when you have the luxury of long range, and medics can most effectively heal anyone that catches a bullet, while riflemen and gunners are better off under closer combat circumstances. Balancing your squad with an array of talents is critical.

While squad shooter veterans might be a little put off by the surprisingly frequent stretches of solo play, usually involving a trip to a rally point reunion, or raining bullets from a helicopter's chain-gun, GRAW2 still offers tons of tactical juice--managing your cover, spotting snipers, and flanking the enemy without getting tagged makes for a tense and gritty play experience. The spectacular graphics--embellished as they are with dynamic lighting, first-rate texturing, and the heat shimmer of convincing, fiery explosions--also do a fantastic job of pulling you into the game's world.

Unfortunately, excitement isn't the only thing that'll get your heart rate up. While the enemy AI has certainly improved, it's still too predictable. Even at the highest difficulty settings, enemies pop out from cover in too predictable a cycle, and don't take the advancement and flanking opportunities available to them. Meanwhile, your own goons might not get hung up on any corners, but they still demonstrate a suicidal willingness to step in front of your fire, or go hunting for a new cover spot at precisely the wrong moment. Worst of all, the heavy support you'll occasionally pick up armored personnel carriers, tanks, recon and gunship choppers are often best told to go hide in a corner while you clear the opposition, since they act as if a coma patient is behind the wheel.

But even if your compatriots are running around like headless chickens, at least you'll always be cool under fire. The control layout is the slickest it's ever been, putting everything from firing options, weapon changes, and simple orders right at your fingertips. Select an allied asset with the directional pad, and hold down the right bumper to see the world from their full-screen point of view. This lets you take direct control of reconnaissance drones, and order companions to new cover without having them in your sight line, and every last bit of it is rendered in gorgeous detail.

The idea of a networked battleground, all accessed by a cyborg-like HUD, is intoxicating, but there is a troubling responsiveness issue with some of the basic movement commands. Who wants to wait a second and a half to hit the deck when unseen enemies start unloading on you? Why do you have to wait for a stance change animation to complete before switching weapons, or changing firing modes? Why are you sometimes unable to look down your rifle's scope without backing away from cover an inch or two?

Perhaps it's testament to the cunning mission design, with its seemingly fluid objectives and only occasionally cheesy scripting, that the whole affair manages to be more exciting and entertaining than maddening despite these complaints. Still, whatever frustrations might lurk in the single player campaign, it's actually only half the game. Everything that made GRAW a multiplayer hit has been polished and expanded, with player complaints like spawn camping and degraded online image quality fully and effectively addressed.

There's so much to do online, it's actually a little ridiculous. Sixteen male and female characters might drop into a six mission co-op campaign that expands on the events of the main storyline. Ad-hoc fireteams and lone gunmen can comb eight new maps (out of 18 total) of remarkable versatility and tactical opportunity at varying times of day while healing each other Gears of War-style.

There are even a few new modes, like "Officer," where a single random teammate's kills and deaths have a greater impact on the final scoreboard, or "Divide & Conquer," where every zone you take control of awards you more and stronger AI support, like soldiers and helicopter coverage. Everything from spawn counts, kit restrictions, and time limits is easily customized in seconds. There's even full clan support, where you and 99 of your closest pals can train together to become a well-oiled military machine.

Ghost Recon Advanced Warfighter 2 is one of those games that makes you wonder how long it'll be before the advent of a dedicated online-only military world. The latest in this series might not reinvent the squad shooter, but with so much of its true value wrapped up in a compelling and expertly crafted online experience, it simply doesn't have to. Even the lingering control issues recede in the presence of a level playing field. Still, even if you don't care one whit about online gaming, Red Storm's latest is exciting enough to offset the nagging sense that you've trod this ground before. It might not represent the pinnacle of the genre, but it is well worth playing. On the other hand, if live and breathe online gaming, GRAW 2 is undoubtedly a must-buy.