Sticking close to what made the Wii version last year's best option, World Stage should be familiar to anyone who hopped on his or her balance boards or waggled their Wii Remotes in Road Trip 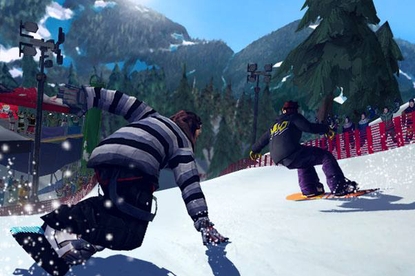 White's latest romp down the digital slopes offers a quick burst of simple yet satisfying snowboarding fun. It's a little too similar to last year's Road Trip, and some may find the approach too casual, but it definitely works as an arcade-styled entry that anyone can enjoy.

Shaun White Snowboarding returns with World Stage, a brand new snowboarding experience created from the ground-up exclusively for Nintendo's family-friendly console. By limiting the franchise to coincide with the Wii's mainstream appeal, Ubisoft may have ensured we get more sequels in the fledgling franchise as Shaun White Snowboarding: World Stage offers a more accessible, trick-filled trek down the virtual slopes than its multi-platform predecessor.

Sticking close to what made the Wii version last year's best option, World Stage should be familiar to anyone who hopped on his or her balance boards or waggled their Wii Remotes in Road Trip. It retains the same stylised visuals, simple controls, and addictive gameplay that'll appeal most to those not looking for a realistic extreme sports sim. The cartoony visuals are complemented nicely by World Stage's over-the-top, world-spanning events such as a half-pipe erected in New York City's Times Square, and the controls, whether your perched on the board or clutching the Wii Remote, are arcadey and forgiving; regardless of how daring you get with your jumps, tricks, and rail-grinds, you wont be left with a face full of snow for very long. 4-player local play and the ability to customise your own moves also add to the frigid fun with a nice layer of competitive customisation.

To that end, all but casual fans might find the experience a little too easy. Kids will love it, but more seasoned board rats might want to seek out the deeper Stoked: Big Air Edition. Regardless of age, though, anyone craving some quick pick-up-and-play snow carving should at least get a kick out of World Tour.