Fans of good old-fashioned 2D side-scroll platformers will appreciate Rayman Origins in their PS Vita games collection. The title looks and feels great on the new Sony portable console although a lack of co-op multiplayer is a bit of a disappointment.

I’ll make a bold declaration now: Rayman Origins on the PS Vita is not a particularly challenging game. That is, of course, unless you want to excel at it. If that is your calling, then prepare for plenty of trial and effort along the way coupled with lengthy periods of frustration. But once you succeed in overcoming the challenges the game presents then you will be rewarded with a tremendous sense of satisfaction.

The Rayman series has endured since it first debut on the PlayStation and has went on to grace many other consoles. Originally a 2D platformer game, the series spun out and explored 3D graphics, golfing, and even mini party games.

Rayman Origins, first released late last year on the three major home consoles, is a return to its 2D side-scrolling platformer roots and is a nice addition to the PS Vita line-up. To be honest, I was never a huge fan of the Rayman platformer games (I was more enamoured with a certain Italian plumber in my youth). Nonetheless, I found myself immersed with Rayman Origins on the PS Vita.

The story begins with our protagonist, Rayman, chilling out with his friends in his forest home when their snoring wakes up some cranky undeads which then emerge to kidnap, Electrons, Lums, nymphs, and generally wreak havoc unto the land.

The plot really isn’t important other than to give you an excuse for jumping, climbing, gliding and punching your way through different foe-infested locations as the magical Rayman.

The gameplay, as outlined above, is simple but effective. Our limbless protagonist can jump on or punch his enemies to take them down, glide past obstacles with his propeller-like hair, and swim through underwater labyrinths. He acquires some of these skills as he rescues nymphs along his adventure.

There are also particular tools and aides, such as drums which Rayman can bounce off to jump higher, littered through each stage of the game to assist him on his journey. 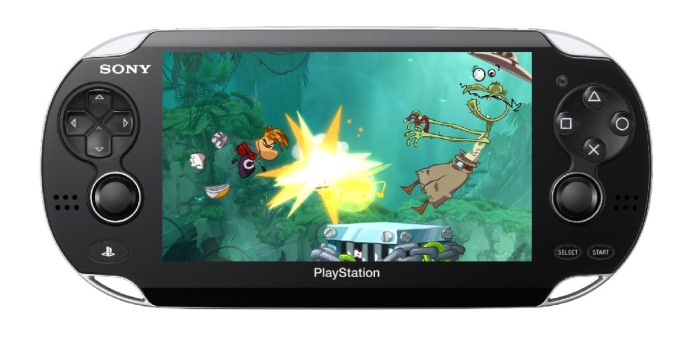 Rayman Origins on the PS Vita.

Rayman Origins is very responsive on the PS Vita making control of the character a breeze and precision jumping, a staple of traditional 2D sidecrolling platformers, possible.

While the PS Vita touchscreen is used by the game, it is only used for collecting Lums (think coins in the Mario world) that are encased in bubbles. Players can’t control Rayman through the touchscreen, which seems like a huge waste of the PS Vita’s potential.

The 2D graphics from the game’s original release are seamlessly ported over to the PS Vita. Picture quality is console-grade though it hardly seems a challenge given the simple Nickelodeon-style cartoon drawings. But the addictive qualities of an old-school platformer definitely resonate well with the PS Vita.

Remember Super Mario World on the Super Nintendo? I do. As a child, I was fiendishly trying to knock out rows of enemies with a single tortoise shell often restarting the game to get the process just right.

I found myself doing the same thing in Rayman Origins. 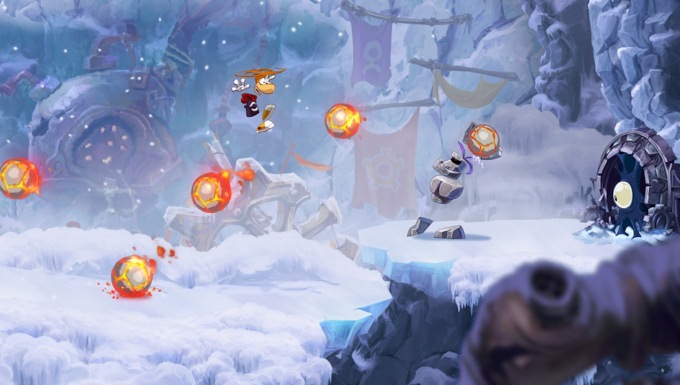 What’s great about having it on a handheld is when you’re fuming after trying to jump onto a floating platform for the umpteenth time, you can just put the machine to sleep, down a nice calming glass of cold water, take the game with you to a tranquil park and pick up where you left off an hour ago.

Rayman Origins is punctuated by aerial shooter stages which provide a nice break from plaformer obstacle courses that require more precision and strategy.

In these aerial rounds Rayman rides a mosquito which shoots out projectiles to take down enemies, sucks up levitating bombs and expels them to slay foes or clear obstacles.

Unlike the console version, Rayman Origins on the PS Vita has no co-op mode, which is strange given the handheld is more than capable of supporting multiplayer.

Players will have to make do with a ghost mode which allows them a chance to obtain timed achievements.

Rayman Origins is a return to form for the long-running series. Those that love a good old 2D side-scrolling platformer will appreciate a challenging title they can take on the go.

People that are not particularly skilled at pixel-perfect jumping can still get through the game and come out with a pleasurable experience.