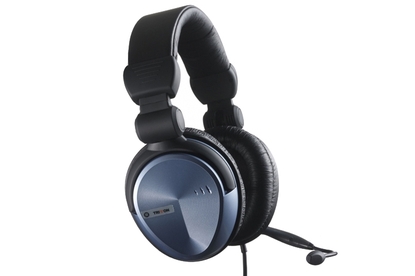 The Tritton AX360 Dolby Digital 5.1 headphones are highly recommended for gamers that want an edge over their opponents on the battlefield.

The Tritton Audio Extreme 360 (AX360) is a true 5.1 Dolby Digital surround sound headphone and microphone combination designed specifically with gaming in mind but with possible applications into any arena where surround sound is used. If you are playing your Xbox 360 or PC games without a home theatre set up, you don't know what you are missing. The current crop of next-gen titles are designed with Dolby 5.1 as standard and as such playing them in stereo puts a gamer at a disadvantage. We were blown away by the AX360's clarity and effectiveness.

The thing that sets these headphones apart from other gaming headphones we have reviewed is that they use a digital signal via optical (TosLink) or coaxial cables to deliver true 5.1 surround sound. There are plenty of "virtual" or "simulated" 5.1 surround sound headphones on the market and many of them do an admirable job, but the clarity and accuracy of the AX360 is, thus far, unmatched. Since each cup has multiple drivers positioned to accurately deliver the incoming 5.1 signal, the audio the wearer hears is true five channel positional sound, a feat not seen before in a console compatible headset.

We tested the headset with an Xbox 360 playing Ghost Recon Advanced Warfighter. No stranger to this title, we are familiar with how it sounds on a regular home theatre set-up and fully expected the Tritton to fall short of this. Thankfully, it was not only clear and accurate, but the closed cups of the headset allowed a large degree of isolation from ambient noise, enveloping us within the in-game audio. Over Xbox Live we entered a multiplayer match to put the AX360 through its paces under real world conditions. Setting up a defensive position near a sand swept rocky outcrop we waited patiently for the enemy. Looking toward the most obvious infiltration point, we suddenly heard footsteps in the sand behind us. Swinging around, we caught an enemy soldier off-guard and promptly dispatched him. Under normal conditions, his footsteps may still have been heard through our regular home theatre set up, however the volume required to achieve such clarity would make in-game communications via the microphone impossible.

During periods of audio inactivity such as in-game menus or the Xbox360 dashboard we detected a slight periodic popping noise. It wasn't particularly overt, more something in the background, and it couldn't be detected during game play so it is a very minor problem. We tested the AX360 with another Xbox360 as well to ensure it wasn't a fault with our console but the same issue occurred.

The included microphone works quite well with clear voice over Xbox Live. The microphone clips on to the side of the left cup via a ball joint socket and has a short cable which plugs into the headset when using it with a PC. However, to enable voice communication when using an Xbox 360, Tritton has included an extension cable to connect the microphone to the Xbox controller. Due to the Xbox360 design, this is the only way to use the microphone and it means that in order to hear the other players in the game through the AX360, you will need to set the voice options to "voice through speakers". This poses a problem, since "voice through speakers" does not output at high quality and tends to sound overly digitized, making other people's voices hard to hear at times. This does not have an impact on the quality of the in-game sound.

Setting up the headphones seems a little daunting at first but is actually quite simple. A powered breakout box performs decoding of the incoming Dolby Digital signal which is sent to the headphones via a proprietary jack with support for up to two sets of headphones. Alternatively, PC users can also connect via a provided cable from their 5.1 compatible sound card. The breakout box can switch between Dolby Digital 5.1, Dolby Pro Logic II or direct stereo signals at the press of a button. There are also controls for volume and rear speaker delay as well as an in-line remote control for volume control in the front, centre and rear speakers as well as the subwoofer. As odd as it sounds, these headphones actually have a built-in subwoofer which works well to further draw the player into the game.

We found the design of the Audio Extreme 360 to be attractive and the build quality was sturdy without being too rigid. The cups can be easily positioned and folded inward for compact storage, and despite their closed design they offer great airflow, which helps for those marathon sessions in the middle of summer. The padded headband and ear cups make the headset very comfortable, even after hours of use.

The exceptional audio, high comfort factor and the fact that they can be used with a digital sources makes the Tritton AX360 highly recommended for gamers that want an edge over their opponents on the battlefield. Finally, we can play video games at 2am, in full 5.1 Dolby Digital without waking the household and neighbours.