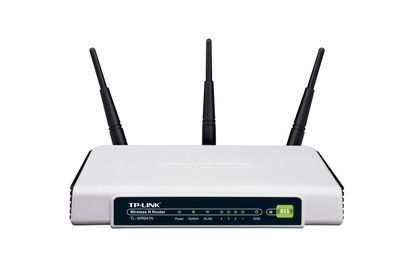 As far as wireless networking is concerned, this router is exceptional value. You get 802.11 draft-n capability, along with MIMO antenna technology, all for a street price considerably less than $150. Best of all, it was reliable in our tests and relatively easy to configure.

Migrating to an 802.11 draft-n wireless network will cost you well under $200 if you opt to shop around a little and go for the TP-Link TL-WR941N router and one of its associated USB adapters (TL-WN821N). It will distribute either an ADSL2+ or cable connection through its 10/100 Ethernet switch and 802.11 draft-n wireless access point, and it also features MIMO antenna technology.

It is relatively easy to set up the router using its Web interface, which is similar to the interface employed by NETGEAR routers: the left-hand pane is for navigation, the middle pane is where you make your changes, and the right-hand pane has brief descriptions on all the features displayed in the middle pane.

When we first set up the router to work with our ADSL connection, we failed to select the 'automatic' WAN connection mode, leaving it on 'manual'. Once we ironed out this user error the router stayed connected to the Internet throughout our test period. We distributed the Internet connection to two computers on our network, downloading BitTorrent files and accessing Web pages while conducting file transfers over the LAN, over prolonged periods of time. The unit handled it all without any problems; it barely got warm at all.

Its wireless access point supports 802.11g and 802.11 draft-n speeds, but it's not a dual-band router: it will only run in the 2.4GHz spectrum. During our tests, we experienced a stable connection to our NETGEAR Digital Entertainer HD EVA8000 media streamer, although we did have to change channels a couple of times. For file transfers, we used the router's 40MHz channel-width in 802.11 draft-n mode, which produced good speed. Over a distance of approximately 10m, and with double-brick walls as obstacles, the router averaged 5.61 megabytes per second (MBps). This is a little slower than the result achieved by the Linksys WRT160N.

While streaming a video through the NETGEAR, the same file transfers averaged 4.77MBps, which is slightly faster than the Linksys. It shows that this router has plenty of bandwidth for streaming videos while simultaneously conducting regular file transfers. It will be of great benefit to anyone who wants to stream high-definition video, and it will also produce good results in any household videos (such as XviD-encoded files) need to be streamed concurrently by different computers.

We were able to stream video up to approximately 30m before it cut out. This was an expected result for a wireless router in our environment; the results you get will depend on the environment in which you use this router.

For security, the unit has a built-in firewall, which is not enabled by default; it has a domain name filter (but not a keyword filter), which can be used to block unwanted URLs from being accessed (blocked pages won't invoke a conspicuous page saying they are blocked, but instead will appear to just be offline). It has encryption up to the WPA2 level for wireless networking (including mixed WPA/WPA2 mode), and we used mixed mode for all our tests. Wi-Fi Protected Setup is also supported, so you can enable wireless networking security either by using a PIN code or by pressing the physical button, depending on the mode your client devices support. (The router has a button on its front panel.)

Of course, the router supports port-forwarding, DMZ and network address translation, and it has a DHCP server. It doesn't have built-in support for VPN protocols (although it does have VPN passthrough), nor does it have a QoS (quality of service) feature. Still, its feature-set is pretty good for such an inexpensive router and it was very reliable during our test period. It's worth considering this unit if you're in the market for a faster wireless router for a home environment.