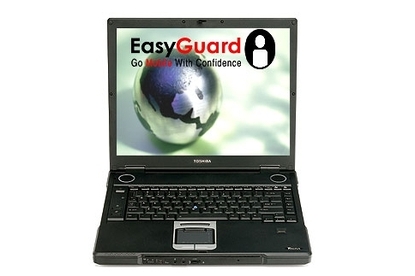 Toshiba has put a lot of thought into the development of the Tecra S3, which is claimed to be the world's first notebook compliant with ROHS (Restriction of Hazardous Substances).

Whilst it doesn't cut the most dashing figure, it certainly holds its own in performance and usability. Toshiba has focused on three main areas to improve on their previous models; security, connectivity and durability. Whilst it wasn't a main focus, usability seems to have been significantly improved as well.

To improve security, the Tecra S3 has a biometric finger scanner that allows you to have a single sign-on and encrypted files using your fingerprint and a 2048-bit Infineon Total Protection Module (TPM) chip for encryption. Durability has been enhanced significantly with a horde of new features. For instance, the screen is slightly smaller than body of the notebook so that when it is dropped, the body will take most of the force. This may sound like a bad idea, likely to hammer your hard drive, however, Toshiba has taken care of this with sensors to detect erratic movement and safely lock the drive heads. The sensitivity of this can be adjusted so that it won't give you hassles when working on the bus. The keyboard is also spill-proof, we haven't been allowed to put it to the test, but after pulling it apart, the insides of the computer look well protected.

Connectivity has improved via Toshiba's own proprietary software suite, Config Free. This manages your Bluetooth, Wi-Fi and Ethernet connections with some very user friendly utilities.

The Tecra S3 performed very well for gaming, scoring 14358 in 3DMark 2001SE and 82 in WorldBench 5. FEAR ran at average 23fps (frames per second) on high settings (it also ran very hot). The only thing it is really missing is a built-in camera and microphone.