Toshiba Tablet AT1S0 review: A solid 7in Android tablet, but not a great one Aside from a terrible name, the Toshiba Tablet AT1S0 does come with some decent features for its size. It has a HDMI-out port, a standard mini-USB port and a microSD card slot. However, there is no 3G model available, build quality is less than stellar and the screen isn't as vibrant as alternatives. Overall the Tablet AT1S0 is a good tablet, but it's far from a great one.

Toshiba is following Samsung, BlackBerry and Acer's lead by releasing a compact 7in tablet. The strangely named Toshiba Tablet AT1S0 is a smaller version of the company's 10.1in Tablet (AT100) but it unfortunately removes most of the features that distinguished that model from other Android tablets on the market.

Most Android tablets are very similar — they all have near identical specifications, run identical software aside from manufacturer UI skins, and have largely the same features. Toshiba has at least attempted to give the Tablet AT1S0 a unique look and feel. For starters, it is immediately recognisable by its back cover: it's made from grippy, soft-feeling plastic that has etched diagonal lines. This means that AT1S0 is comfortable to grip and won't easily slip out of your hands.

The rest of the Toshiba Tablet AT1S0's design is fairly straightforward, however. We like the slider that prevents the screen from rotating on the left side, though the volume and power keys above them are a little too sunken and do require a firm press to activate. Below these keys is a long plastic flap that conceals the AT1S0's three ports: a micro-HDMI port, a mini-USB port and a microSD card slot. Unfortunately, the Tablet AT1S0 doesn't charge via the mini-USB port: instead, Toshiba uses a proprietary dock port on the bottom. Although it's not as flexible as using a regular USB port, the use of a proprietary dock results in a faster charge (around one hour) and means the device should be compatible with a range of accessories including a desktop dock with audio out. 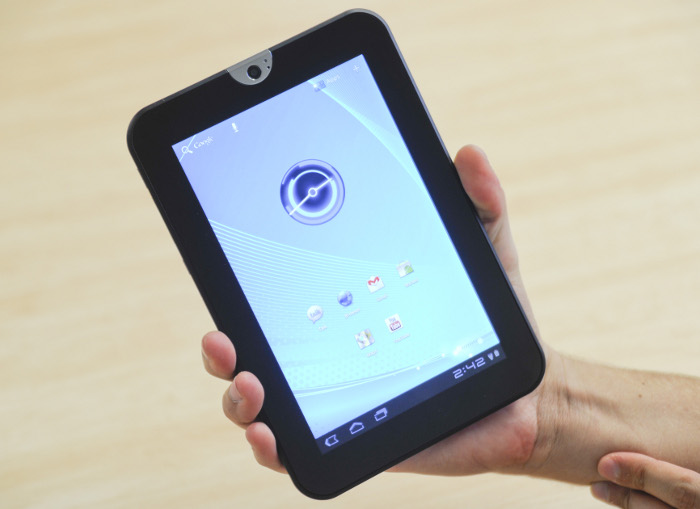 Build quality is hit and miss: the rear cover of the AT1S0 feels a little flimsy when pressure is applied and we dislike the glossy, chrome plastic surrounding the front and rear cameras. Further, the Tablet AT1S0 doesn't get any of the features that made the AT100 a unique product: a full-sized HDMI-port, a full sized USB port, a removable battery and multi-coloured back plates.

The 7in display of the Toshiba Tablet AT1S0 is LED backlit and has an impressive 1280x800 resolution. It's bright, clear and responsive and displays crisp text, especially when viewing Web pages. It's not quite as vibrant as the AMOLED panel on the Samsung Galaxy Tab 7.7 and it's viewing angles are far less impressive, but on the whole it will satisfy most users. A nice touch is the hidden LED light in the top left corner of the bezel: it flashes white when the display is asleep. 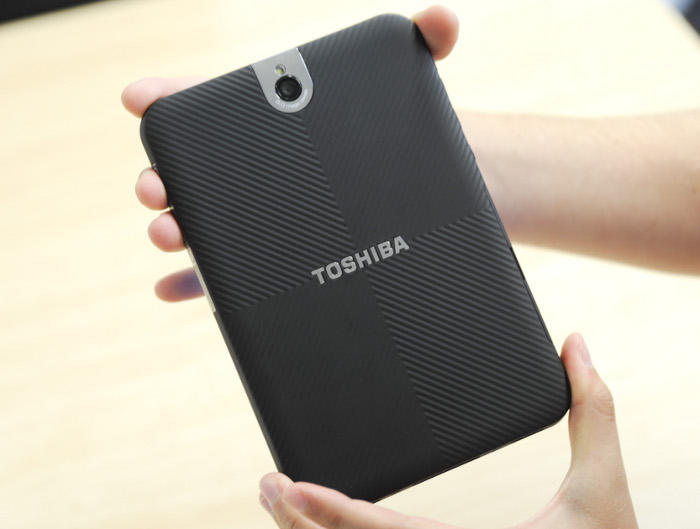