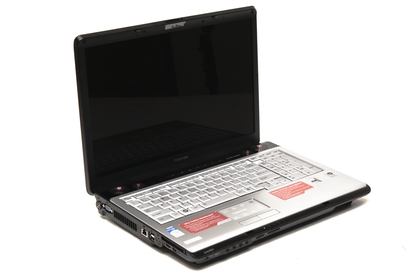 It's not the kind of notebook you want to carry around with you everywhere, but it's a powerful desktop replacement that will provide plenty of entertainment.

The Toshiba Satellite X200 (PSPBUA-00N007) is the second of Toshiba's high-end gaming notebooks we've looked at and we like its style. It's Toshiba's answer to the Dell XPS range, such as the Dell XPS M1730, or the ASUS G series, such as the G2S and performs well for its segment of the market, offering a high-end CPU and SLI graphics cards. Above and beyond the games, however, the X200 also offers a premium movie-watching experience with an HD-DVD ROM drive.

It may handle some gaming, but the Satellite X200 isn't a tacky gaming machine with flashing lights or gimmicks. Instead it offers the same stylised design as the rest of the Satellite range, but with a fake-wood finish that's debatably classy and the usual soft rounded edges we're used to. A full-sized keyboard is included with a number pad to boot.

But enough about the outside; inside this beast you'll find Intel's T7800 Core 2 Duo CPU with a whopping 2.6GHz of CPU grunt to play with, an 800MHz front side bus and a 4MB L2 cache. A total of 2GB of DDR2 667MHz RAM is installed and SLI NVIDIA GeForce 8600M GT graphics cards with a total of 512MB of GDDR3 graphics memory provide plenty of gaming power. Two 200GB hard drives provide a total of 400GB of storage, enough for even the larger media collections.

The 17in screen offers a nice resolution of 1680x1050, which isn't quite up to the quality of the HD-DVD media (1920x1200), but is sharp nonetheless. The viewing angle is quite impressive, unlike many notebooks, and both brightness and contrast levels are good.

Toshiba's Satellite range typically uses Harmon Kardon speakers, and the X200 is no different. These particular speakers produce some very nice, crisp and deep audio, which make gaming, movie watching or just listening to music that much better. The washed-out pink highlights on the speaker drivers are a little odd, but not worth considering a negative design feature.

No high-end machine with a high-definition media player would be complete without an HDMI output, allowing you to hook this system up to an HDMI compatible home theatre or TV with ease. Although the X200 includes HDMI it lacks an e-SATA port. Although e-SATA is not prolific just yet, it's a shame not to include it in high-end models like this. The X200 does have an Express Card slot, so you can at least buy something like Belkin's SATA II Express Card.

In all benchmarks we saw fairly good results. In WorldBench 6 it scored a solid 88, though it's still not the top performer; that position still goes to the Dell XPS M1330 on 93 (as of the time of this review). In our MP3 encoding tests we saw fast results. Encoding 53 minutes worth of WAV files to 192Kbps MP3 files took just 66sec using iTunes. Using Cdex, which applies just one core of the CPU to the task, took a slower 108sec.

In 3DMark 2006 it mustered a healthy 3806, suggesting it will handle some of the latest games, though probably not at the highest settings. 3DMark 2001 SE's score of 28,316 shows older games will run as smooth as a baby' bottom. We weren't expecting phenomenal results from our battery test as it's such a large, power hungry unit, so we weren't surprised when the DVD test ran down the X200 in just one hour.