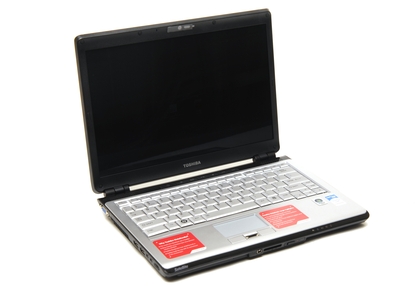 An excellent choice for on-the-road business users, offering great performance and excellent battery life. Its size, weight and battery life make it very portable and it's got some style, too.

Toshiba's new mini-Satellite, the U300, brings Toshiba's typical Satellite design to the ultra portable market. A few things have been cut back to make the lightweight division, but power isn't one of them. Despite its smaller stature, the Toshiba Satellite U300 (PSU30A-05302P) we tested includes some powerful hardware and returned some good benchmark results.

This lightweight (2.1kg) 12in notebook runs on Intel's latest Centrino platform (originally codenamed Santa Rosa), and includes a T7500 2.2GHz Core 2 Duo CPU with an 800MHz front side bus and a 4MB L2 cache. There is also 2GB of DDR2 RAM installed, giving this little unit plenty of horse power for its size.

No dedicated graphics chip is included, Wi-Fi 802.11a/b/g and draft-n are supported and Windows Vista Business has been pre-installed, suggesting this notebook has less of an entertainment focus than its larger family members such as the Qosmio G40 (PQG40A-00Y014) or Satellite X200 (PSPB9A-02J022), or even the A200 series. However, it's not totally devoid of entertainment features. A set of media controls run above the keyboard and the DVD re-writer can double as a DVD player, though there's no HD-DVD player, such as in a number of other Satellite models. The 1.3-megapixel webcam built into the screen can double for business or personal video calls, and should please those out on the road a lot -- the perfect candidate for this notebook.

The speakers aren't nearly as impressive as the high-end Harmon Kardon speakers found on the larger models, and the screen is nothing particularly special, but it does offer good brightness and contrast levels, even if the viewing angle is quite poor. To offset this somewhat, the screen tilts quite far back, almost flat with the keyboard, making it easier to manipulate this machine into tight working spaces, such as on a plane or any form of public transport.

With that in mind the keyboard itself is nicely spaced and the keys are responsive. It has been shrunk to match the size of the notebook but the most important keys, such as Enter and Shift, haven't been abruptly re-shaped, re-sized or moved. A biometric fingerprint scanner sits snugly between the mouse buttons below the touchpad for some added security. The only thing it's lacking, for a business PC, is an e-SATA port, which would have been a non-essential but nice addition.

As we expected from the hardware, this notebook returned some good results in our benchmarks. In WorldBench 6 it scored a healthy total of 80, indicating it's going to handle most everyday software suites with relative ease and will even do alright in some of the more taxing tasks like video and photo editing. In our MP3 encoding tests it took 76sec to encode 53 minutes worth of WAV files to 192Kbps MP3 files using iTunes, then took 115sec using Cdex (which uses just one out of multiple CPU cores). Battery life on this unit is also very good. We saw excellent results with this unit lasting three hours in our DVD rundown test. This is considered a worst-case scenario test as the DVD drive and speakers are both operating on the battery power.