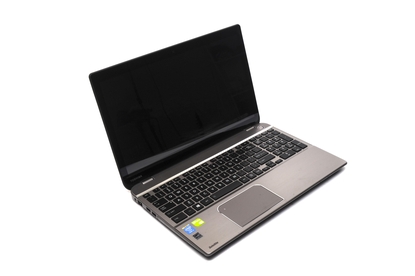 Toshiba's Satellite P50t is a 15.6in touchscreen laptop aimed at those of you who want a home computer for entertainment purposes. It has good features and it looks nice, but its screen is too glossy and it didn't perform as expected in our benchmarks.

There's no denying that Toshiba's Satellite P50t is a classy looking machine. It has clean lines and an elegant finish, and these are among the key indicators that this laptop isn't cheap. But the way it looks is just one part of the equation for this laptop, which has been designed with entertainment in mind: on the inside you get fast processing, lots of storage space and a graphics adapter that can be used for gaming.

Too big to touch?

The P50t is a 15.6in notebook that weighs 2.4kg, and it feels well built for the most part. It's fully featured as far as Windows laptops are concerned. Not only do you get four USB ports (two of them being USB 3.0), you also get HDMI, Gigabit Ethernet, VGA, separate microphone and headphone ports, an SD card slot, and a Blu-ray drive. Add to that Bluetooth, dual-band Wi-Fi, and a webcam, and you have a laptop that's primed for just about any computing tasks that need to be carried out in the home.

What you also get is a Full HD screen resolution with a touchscreen capability. The touchscreen supports 10 simultaneous finger inputs and can come in handy when you want to poke around the Windows Start screen. However, on a 15.6in chassis with a lid that can't be tilted all the way back and a form factor that can't be used as a tablet, the benefits of the touchscreen aren't many. It can be tiring to use the touchscreen for lengthy periods of time, not to mention uncomfortable. But it's nice to have it as an option, and we've grown quite used to prodding and swiping screens for some tasks, rather than using the touchpad (we select music with our fingers when using Google Play Music, for example).

Using touch on a screen with a 1920x1080 resolution can be difficult due to how small icons and other items look, but Toshiba supplies Display Utility, which is part of its Desktop Assist suite, and can make screen text on the Windows Desktop look bigger. We first saw this utility on the Toshiba KIRA, which has a much higher screen resolution of 2560x1440, and it can definitely come in handy when you want to poke around File Explorer windows, for example. It also makes content in Firefox appear bigger by default, but Chrome content isn't affected. You'll have to enlarge pages manually in Chrome if you want to make them easier to view and friendlier to touch.

We found the overall performance of the Satellite P50t to be responsive during everyday usage, and it should be considering what's inside. It comes with a fourth-generation Intel Core i7-4700MQ quad-core CPU, which supplies eight threads of processing and a 2.4GHz standard speed. It's joined by 16GB of DDR3 SDRAM, an NVIDIA GeForce GT 745M graphics adapter, and a 1TB hybrid hard drive, which has a solid state cache built in to speed up the booting of the operating system and regularly-used applications.

In our performance tests, though, the P50t didn't put up the results we expected. In the Blender 3D rendering and iTunes MP3 encoding tests, the P50t obtained times of 25sec and 43sec, respectively. The iTunes time is only one second off what we expected, but the Blender time is 5sec off when compared to the other Core i7-4700QM machine we've seen, HP's Envy 17. The Handbrake test also showed signs of a sluggish configuration, taking 13min 45sec to turn a DVD file into an MP4, whereas the HP took 8min 52sec.

There is a lot of background software installed on the Satellite P50t, which is the usual thing that Toshiba does to its laptops — it even comes with Intel's AppUp installed, which we're not sure if anyone uses (we used it once back when netbooks were still a thing). We disabled all that software to see if it would make a difference to the benchmark times — it didn't. (Neither did updating the graphics adapter's drivers). Disabling the software made the machine more pleasant to use though, especially because Clickfree is installed by default and every time a USB storage device is detected, it asks you if you want to use it as a backup drive.

While the default CPU performance was sluggish, the graphics performance was quite good thanks to the NVIDIA GeForce 745M adapter. It recorded 13072 in 3DMark06 (which we mainly use as a point of comparison against older systems), while in the latest 3DMark it recorded 64896 for the Ice Storm test, 8124 for the Cloud Gate test and 1376 for the Fire Strike test. All of these results scale nicely compared to the NVIDIA GeForce 740M graphics adapter that was in the HP Envy 17, meaning that the Satellite P50t was expectedly faster. You can use it for playing many games, but not all will run smoothly at the native Full HD resolution of the screen — you'll have to compromise detail levels and resolution for some titles in order to get smoother frame rates.

Storage performance was decent considering the laptop uses a mechanical drive for primary storage. In CrystalDiskMark, a read rate of 141.8 megabytes per second was achieved, which is better than the read performance offered by the HP Envy 17, which uses the same drive (a Toshiba MQ01ABD100H), though the Satellite's write rate was not as good (80.75MBps compared to 114MBps for the HP Envy). The Satellite came out of sleep mode in about 2sec, and we recorded a cold boot time of 14sec (the time it took to get to the Windows login screen). A hard drive protection utility is installed in the background, which parks the heads when movement is detected. It's very sensitive by default, but can be adjusted.

The battery for this laptop is internal and can't be easily removed or replaced. In our rundown tests, in which we disable power management, enable Wi-Fi, maximise screen brightness and loop an Xvid-encoded video file, it lasted 2hr 32min. We expected a little more life than that, even for a 15.6in laptop. For comparison, the HP Envy 17, which is a 17in laptop that uses the same CPU, lasted 21min longer. The Toshiba Satellite L850 that we reviewed last year, which had a third-generation Core i7 (2.4GHz) and 15.6in screen (though with a 1366x768 resolution), lasted 2hr 37min.

The Satellite P50t is definitely a laptop that's designed to be more of a stay-at-home machine than something you will use on the road and away from an outlet. In fact, it's meant to appeal to those of you with home entertainment needs. The Blu-ray writer can be used to display Full HD movies, either on the laptop's screen or on a TV via HDMI, and, as mentioned earlier, the graphics adapter will let you conduct some gaming on it. It even has a good pair of speakers installed. In fact, as far as speakers for laptops are concerned, the Satellite P50t's Harman/Kardon pair supplies clear and well-tuned sound for most types of music (and much better than the Beats Audio in the HP Envy 17). There is still some rattling when you use maximum volume, though.

User comfort is aided by a full keyboard that includes a number pad. It has a beautiful white backlight that switches off whenever you aren't typing, and touchpad movements won't activate it. The keys are in a chiclet layout and have plenty of space around them in addition to being large. It's an easy keyboard to type on and should be comfortable for long writing sessions. The keys could perhaps use a little less resistance, as they felt a little too squishy when pressed, and they are also a little to glossy for our liking, but we didn't have any problems with them during lenthy typing sessions.

Because the number pad is large, the main keyboard is positioned to the left of the chassis, which means your hands are not centred on the chassis and there is very little room given to the left palm rest. This could feel inconvenient, especially when typing with the notebook on your lap. The palm rest has a brushed finish, much like the lid, and the right side gets slightly warm. The touchpad is large and we found it to be an accurate performer during our tests. We also had no problems with multi-finger gestures and Windows 8 swipe-in gestures.

One thing to be aware of is the glossy screen. While it has a Full HD resolution and good contrast, it is a very reflective screen that can be very annoying to use in any environment with light sources behind you. The brightness of the screen doesn't seem to do a good enough job of countering these. Another issue is the vertical viewing angle. We had to adjust the tilt of the screen regularly to make some images and Web pages display accurately. For $1999, the screen shouldn't be this fiddly.

There are a few issues with this laptop as far as usability and performance are concerned. We found it to be an underperformer in our CPU tests, and we think that the screen is way too glossy and requires too much fiddling in order to display a properly-viewable image. We're also not fans of the plentiful software that's installed by default. Consider this laptop only if you want a 15.6in, stay-at-home computer that looks good, has a touchscreen, supports Blu-ray playback and writing, and which can also double as a bit of a gaming machine. There is a model without a touchscreen available, too (the P50-A01D), for $1299. That one has the same CPU, but less RAM (8GB).