A 14in Toshiba notebook that feels like a desktop replacement Toshiba's Satellite M500 (PSMKCA-009007) isn't a run-of-the-mill 14in notebook. It straddles the line between business notebook and home entertainment machine, offering plenty of features for everyone -- but it could be better. It's a little on the heavy side, its touchpad is poor and its battery life is short. On the plus side, it has good speed and pretty much every type of feature you would want to have built into a notebook of this type.

Toshiba's Satellite M500 (PSMKCA-009007) is a 14in, fully featured notebook that's suitable for business and home users alike. It has a dual-core Core 2 Duo CPU, modern ports and slots and a surprisingly good speaker system for a notebook of its size. It's also a surprisingly heavy laptop that actually feels more tiring to lug around than many recent 16in models we've reviewed.

It weighs 2.4kg, which is hefty for a 14in notebook (and only 200g lighter than the 16in Samsung R580). This weight can be attributed to the packed nature of the base: It's approximately 3cm thick and accommodates three dedicated USB 2.0 ports, an eSATA port (which also doubles as a fourth USB 2.0 port), HDMI, VGA, Gigabit Ethernet, a 56Kbps modem, an SD card reader and an ExpressCard/54 slot. It also has a rather thick, tray-loading DVD burner. That's not all though — the graphics card is a GeForce G210M. It gives the Toshiba Satellite M500 (PSMKCA-009007) plenty of grunt for graphics processing and doesn't hog any of the main system memory. It also means that the M500 needs a serious heat sink and cooling fan.

Part of the weight of the laptop comes from the hefty cooling system for the CPU and graphics card.

The Toshiba Satellite M500 (PSMKCA-009007) is designed to have everything you will ever require in a portable computer: decent speed, plenty of connectivity, a large hard drive, a DVD burner, good speakers, and a full-sized expansion slot. The only other things you could ask for are a lighter weight, integrated 3G and a better battery.

In our battery rundown test — in which we disable power management, enable Wi-Fi, maximise screen brightness and loop an Xvid-encoded video — the M500 lasted only 1hr 44min. It's a short time that won't even get you through many movies and it doesn't compare well even against bigger notebooks. For example, it only lasted 9min longer than the 16in Samsung R580, and 2min longer than the 16in ASUS N61J. Against a 14in notebook such as Dell's Precision M2400, it was 22min shorter. However, Toshiba does supply an 'eco' power profile and a physical shortcut button so that you can quickly enable it; this mode improved battery life by an extra 30min in our tests.

The reason for the short battery life is the Satellite M500's powerful configuration. You get a 2.2GHz Intel Core 2 Duo T6600 CPU — not a low-voltage CPU — as well as an NVIDIA GeForce G210M graphics adapter instead of integrated Intel graphics and 4GB of RAM (although only 3GB is usable as the 32-bit version of Windows 7 is installed). The T6600 CPU has two cores but no Hyper-Threading (like a Core i3 or i5 CPU), and it's useful for multitasking and even encoding media files. You can easily use the Toshiba Satellite M500 for ripping a DVD to your hard drive, for example, as well as running office applications and imaging programs. In both our Blender 3D rendering and iTunes MP3 encoding tests the laptop recorded a time of 1min 24sec. This is only 1sec slower than the almost identically configured Sony VAIO CW Series (VPCCW15FGW) notebook; in short, we're happy with the way the M500 ran in our tests.

Graphics performance was also very good, with the NVIDIA GeForce G210M scoring 3592 in 3DMark06. It's not going to handle the latest games super-smoothly, but it will run some games when the image detail is low and the resolution is less than the screen's native 1366x768. Don't purchase this notebook with aspirations of playing games on it full time though, as it's simply not designed for it.

We're not overly thrilled with the notebook's touchpad. It's very small (6.4x3.1cm), it feels a little sticky and the cursor tends to jump around a lot. You don't get gesture support either, which isn't a big deal unless you're already used to flicking and pinching your way through the Windows 7 interface. We'd definitely like a bigger touchpad, but this would require either the keyboard to be smaller or the shortcut buttons and speakers to be eradicated. The keyboard is comfortable to use thanks to 18mm-wide keys, and there aren't any keys in awkward positions.

The keyboard isn't backlit, but that doesn't mean there is a shortage of lights on the M500. In fact, it's a very bright notebook. The indicator lights at the front of the base are very bright LEDs that can be distracting when you leave the notebook plugged in at night — the power LED is always illuminated when the notebook is plugged into an outlet. The shortcut panel's backlit buttons are also quite bright and remain on unless you diable them in the BIOS. We wish there was also a way to disable the main indicator lights. 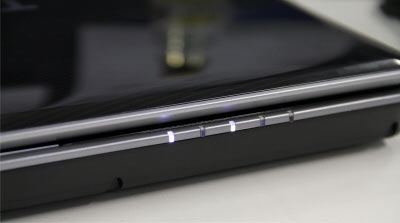 These lights are very bright and are always illuminated when the notebook is plugged into an outlet.

A glossy sheen envelops the screen and the palm rest and this causes reflections when you use the notebook in an environment with plenty of lights. The screen in particular can be very annoying to look at while watching a move during the day, for example. If you switch off the screen, it becomes a fairly competent mirror. 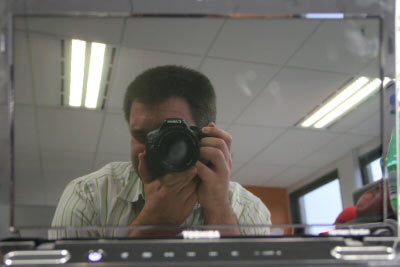 The M500 is highly reflective and it has almost a mirror finish (the camera exaggerated the colours somewhat).

As is the case with most Toshiba notebooks these days, the Satellite M500 comes with a large set of features that you can't see just by glancing at the sides. It has 3D hard drive protection that kicks in when the notebook is moved — it's a little too sensitive, but this can be adjusted. A Sleep-and-Charge port can charge USB devices even when the laptop is switched off and unplugged. There are four different modes to try if your USB device is not recognised, and this can be a pain to set up, but it recognised our Creative Zen in Mode 1. The laptop also has HDMI-CEC, which allows a TV remote to power the notebook on and off when it's attached to it via HDMI, and it even comes with a voice recognition utility. The voice recognition utility can be used to launch Windows applications, but don't use it with the notebook's built-in microphone as it will take forever to figure out what you've said and launches program you didn't want 60sec after your command. Use a headset instead.

Overall, the Toshiba's Satellite M500 (PSMKCA-009007) feels more like a desktop replacement notebook than a laptop you can take to work or school everyday. We like its performance, the large hard drive, and the number of features you get, but we wish it had a bigger and better quality touchpad, that it wasn't so reflective, and that it was lighter.