The Satellite L850 is a good all-rounder, but it's perhaps a little too expensive for what it is 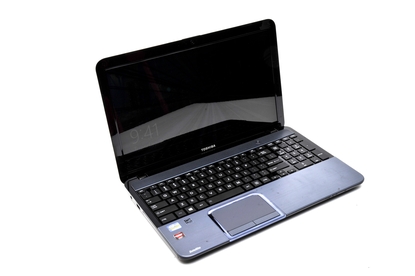 What you get in the Toshiba Satellite L850 is a 15.6in laptop that can be used for a little bit of everything. It has a good CPU and discrete graphics, and it ships with plenty of internal storage space. However, its keyboard can feel cramped thanks to a very small left palm rest area and we also think that its asking price is a little too high compared to the competition.

Toshiba's Satellite L850 is a 15.6in laptop that's designed primarily for home use. It's the type of laptop you should consider if you want something that can allow you to do a little bit of everything, including play games.

The engine room features a third generation Intel Core i7 CPU and an AMD Radeon HD 7670 graphics card, so you can definitely get some great performance out of this laptop. However, for what it is, the L850's price point is perhaps a little on the high side. Compared to similar models on the Aussie market that offer the same amount of speed, it should be a couple of hundred dollars cheaper.

The Satellite L850 isn't the type of computer that you can easily take with you to and from the office or the classroom. At 2.4kg, with a 15.6in screen and a thick profile, it's best suited to those of you who want a portable, relatively powerful desktop replacement-style notebook for the home, something you can move from room to room. That said, if you can put up with the weight of the laptop and its large power supply in your backpack, then it can most definitely be taken on the road.

Along the edges of the chassis, you'll find a built-in DVD burner, three USB ports (two of them being USB 3.0), a VGA port, an HDMI port, a Gigabit Ethernet port and an SD card slot. The SD card slot is located under the front-right lip of the unit and can be hard to use unless you lift the notebook up off the desk a little. Cards don't go all the way in either and stick out from the chassis. Annoyingly, every time an SD card or a USB storage device is plugged in to this laptop, the pre-installed Clickfree backup software is invoked. You'll need to uninstall this if you have no intention of using it or it will drive you crazy. There's plenty of other pre-installed software that you might want to assess the future of, too.

It's a well-built laptop with plenty of space inside its chassis for the CPU and the discrete graphics adapter. It doesn't get too warm when it's under a full load for a while, and we didn't find its fan irritating. There is a large vent on the right side for warm air to escape and the laptop sits on noticeable rubber stands that allow the vents at the bottom of the laptop to breathe, too. It needs to be a well ventilated machine considering that it ships with an Intel Core i7-3630QM CPU, a discrete AMD Radeon HD 7670M graphics adapter and a 1TB hard drive. It also has 4GB of RAM installed, with a spare slot free for expansion.

We had no issues with the Satellite L850's performance during our tests. Regular desktop performance and Modern UI apps downloaded from the Microsoft Windows store ran perfectly well. In our Blender 3D rendering test, the 2.4GHz CPU and its eight threads (four cores plus Hyper-Threading) returned a time of 19sec, which is excellent. Our iTunes MP3 encoding test was also completed in a competitive 53sec, while our AutoGordianKnot DVD-to-Xvid test completed in 38min. The CPU also showed off its strength nicely in our Arcsoft MediaConverter 8 test, taking just 7min 29sec to convert a DVD file to an MKV file.

Gaming with this laptop is possible thanks to its Radeon HD 7670M graphics adapter. You'll be able to run many modern games quite well as long as you don't mind running at low graphics settings and at a low resolution. Games downloaded through the Windows store and played through the Modern UI should also run quite well on this machine. We tried Riptide GP and Adera Episode 1, and both ran flawlessly. In 3DMark06, the L850 recorded a score of 9223, which reinforces the fact that it can be a decent gaming laptop if you are on a budget.

Storage is handled by a Toshiba hard drive (MQ01ABD100) with a capacity of 1TB and a spin speed of 5400rpm. It isn't the quickest drive in town. This was shown in our file duplication tests, where it recorded a relatively low 32.61 megabytes per second (MBps). In CrystalDiskMark, it put up a read time of 114MBps and a write time of 110MBps. Unlike many new laptops however, it doesn't have a solid state drive installed to boost the laptop's boot time. That said, boot time was still a zippy 15sec in our tests, this being the time it took for the laptop to cold boot to the Windows login screen. It was able to resume from sleep within 3sec.

The L850's battery sits along the spine of the chassis and it's removable. It has a rating of 48 Watt-hours and it provides a life that is not too bad considering the notebook's class. In our rundown tests, in which we disable power management, enable Wi-Fi (there is a single-band, 802.11n module from Realtek in this unit), maximise screen brightness and loop an Xvid-encoded video, the L850 lasted only 2hr 37min. Laptops that we've seen with similar configurations, such as the old Medion Akoya MD 98068, for example, lasted a little closer to three hours in the same test. That said, if you employ a proper power management plan, a low screen brightness, and if you only use the laptop for tasks that are not CPU intensive, you'll get a good deal more out of it.

In terms of style, the L850 comes in a dark grey with some glossy black bits around the screen and keyboard tray. It's not an unattractive laptop by any means. It also doesn't have any extra buttons along the top of the keyboard. All you get above the keyboard are the speaker grilles, which blend in with the overall style of the unit, and the power button. In a nod to convenience, the function keys have been reversed so that the brightness, volume and media player controls are the primary functions. You don't have to press the Fn key in order to change those settings, but this can be reversed in the BIOS if you like to do things the conventional way.

However, we're not fans of the overall layout of the keyboard. Toshiba has packed in a number pad on the right side of the keyboard, which means that the keyboard itself sits a little the left of centre. As a consequence, the touchpad sits centred under the space bar, meaning that it is also positioned greatly to the left. The end result is a palm rest area that is very cramped for your left hand and it can make typing feel very awkward, especially if you have big hands. We would have liked Toshiba to either forgo the number pad on this model and make the keyboard feel more luxurious, or for the touchpad to have been installed a little more towards the centre of the unit rather than so far to the left.

The keyboard itself isn't too bad though. The keys have adequate travel and responsiveness and we didn't make too many errors while using it — which is always a good sign. But again, the fact that the left palm rest is so small (83x88mm) made it tiring to type on this model for long periods of time. We should also point out that it's not a backlit keyboard; you'll have to leave a light on if you want to work on this computer at night.

The touchpad is a large 91x56mm and it has dedicated left and right buttons. It's a Synaptics pad that performed smoothly and accurately for us in our tests. It supports multiple-finger gestures such as three-finger swipes, and it also supports edge swipes that allow you to easily access Windows 8's Charms, Switcher and program settings. However, the touchpad isn't flush with the palm rest. Instead, it is slightly depressed in the palm rest and has an 8mm border around it. It can feel a little awkward to make the swipe in gestures because of this.

Even though this laptop runs Windows 8, it doesn't have a touchscreen. It's equipped with a regular LCD panel that's passable for most tasks, but it isn't great. The viewing angles are narrow (especially vertically), colours can look a little washed out, and reflections can be a problem off the glossy finish. The native resolution is 1366x768, which is nothing unusual for a mainstream laptop at this price point.

With Windows 8 running the show and a strong configuration under the hood, the Satellite L850 feels quite zippy for everyday work. It's a good unit to consider if you want something that can be used for productivity as well as fun tasks. It will run many games quite well and can be used to run the likes of Battlefield 3 comfortably, although at low graphics and resolution levels. However, we can't help but feel that the price point is just a little too high. A few competing laptops with very similar configurations, such as the 15in Dell Inspiron 15R, can be had for a couple of hundred dollars cheaper if you shop around.

If you need help using the new Windows 8 interface on a laptop such as this one, be sure to check out our Beginner's Guide to Windows 8. We show you how to use the Start screen and all of the other features that the new operating system offers.