A sturdy and cheap notebook 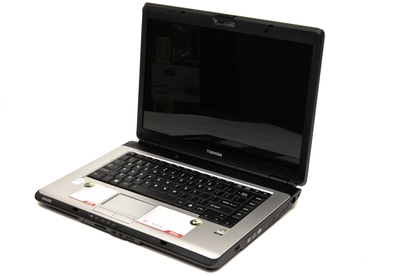 If you don't need to run the latest games and you aren't after a notebook to be the heart of your home entertainment setup, then the Toshiba Satellite L300/L02 is a decent choice. It won't excite you with its specs, impress you with its size or wow you with its design, but it performs well enough at basic tasks and it's hard to go wrong at this price — especially once you take into account Toshiba's cash-back offer.

With a 15.4in screen and a weight of 2.7kg without its power supply it isn't exactly an ultraportable. However, it is still easy enough to cart to and from work or school. It's also useable while commuting (we managed to test this only once on a crowded commuter train, once we finally found an available seat), but its size can make it a little awkward in cramped confines.

Although it cuts down on the Satellite L300's portability, the screen size plus a keyboard with full-sized keys make it a decent (if basic) desktop replacement. The keys, although having a little less travel than we'd like, is generally comfortable to use; the touchpad works well. After extended use the notebook gets distinctly warm underneath, although not enough to be uncomfortable.

The notebook's design is classic, unassuming Toshiba: a dull silver lid emblazoned with the company's logo and a plain interior. The build quality is what we expect from notebooks in the Satellite line; it certainly feels solid enough. Our only concern is some slight give in the bezel surrounding the monitor.

With an Intel Core 2 Duo T2370 processor running at 1.73GHz and 1GB of DDR2 RAM, this notebook is hardly a powerhouse. It scored just 59 in WorldBench 6, and in our MP3 encoding test it took 1min 42sec to convert 52min of WAV files into MP3s. These scores mean you aren't going to want to edit too much video, nor will you be able to comfortably work on that 500MB masterpiece in Adobe Photoshop. However, the tests showed that the Satellite L300/L02 should easily cope with basic office applications like Microsoft Word, and you'll be able to comfortably browse the Web while simultaneously listening to a few tunes.

The performance of the integrated X3100 graphics chipset from Intel is what you'd expect, with the notebook scoring just 283 in 3DMark06. This means you can pretty much rule out playing modern games. The notebook's performance during the playback of DVDs through the optical drive (which is capable of burning dual layer DVDs) was also uninspiring. There was minor ghosting and an irritating grainy quality. The screen is also highly reflective, which is an additional irritation when trying to watch movies.

Given that you won't want to use this laptop for video editing or playing insanely system-taxing games like Crysis, the 120GB hard drive should be adequate for most users. It'll comfortably house all your documents, as well as a swag of photos and a decent music collection.

With a battery that lasted 1hr 42min in our worst-case scenario test (where we disable power management and play a DVD to run down the battery), you should be able to get through most feature-length films, though it obviously won't get you through Ben Hur (not a negative point in our books).

Sound from the two speakers is a bit tinny and fairly hollow — perhaps invest in a good pair of headphones and take advantage of the integrated port, which, along with a 5-in-1 card reader and a microphone port, is located at the unit's front. The laptop is also equipped with a webcam, an integrated microphone, three USB 2.0 ports, a D-Sub port for connecting a monitor or projector, and an ExpressCard slot. Connectivity is courtesy of 802.11g wireless networking, 10/100 Ethernet or (shudder) the integrated 56Kbps modem.

It's easy to get carried away with the shortcomings of a notebook like the Satellite L300/L02, and its specs aren't going to excite you. However it easily has enough power for basic tasks like word processing and Web browsing. This plus the great price tag means this notebook is worth considering as a second computer round the home — great for eliminating all excuses for not doing homework — or as the primary computer of an impoverished student. Business users on a budget might find it useful, but the network capabilities, combined with a build that doesn't come close to the portability of a notebook like the HP 2133 Mini-Note PC (FH441PA), mean they might want to look elsewhere.