The Toshiba Satellite A500 (PSAM3A-03P00E) is a fully featured notebook that's perfect as a desktop replacement, and even as a media hub for your lounge room. It's big, so you won't want to lug it around with you, but it's stylish, so you will want to show it to your friends.

Toshiba's Satellite A500 (PSAM3A-03P00E) is packed with features that not only make it a suitable desktop replacement notebook but also a credible home entertainment hub. It's a 16in notebook and weighs 3kg, so it will be a little awkward to lug to and from work or the classroom, and it will only just fit into a modest-sized backpack. However, that's to be expected from a notebook designed to reside on a desk.

When you unpack the Toshiba Satellite A500 laptop, you are greeted with plenty of gloss, chrome and shine. And once you boot it up, you get to check out the unit's useful illuminated keyboard, which is lit up from beneath and is very easy to type on at night. The keyboard lights can be manually switched on or off, or set to automatically switch off after a predetermined time. The keys themselves are full-sized, smooth to the touch, and provide good responsiveness. It's a pleasure to type on this notebook, and because it's so big Toshiba has also been able to include a number pad, which will be convenient if you're a bean counter. The only key that you might need to look for when you first use the machine is the DEL key, which is not located in the top-right corner, but three keys in and above the number pad.

The overall style of the A500 is flashy, and the insides aren't too shabby either. You get an Intel Core 2 Duo P7350 CPU that runs at 2GHz, 4GB of DDR2 RAM, dedicated ATI Mobility Radeon HD 4650 graphics (with 1GB RAM) and a 500GB hard drive. The notebook will supply good speed for editing office documents, multitasking, photo and video editing, and can be used to run games (although newer titles will run best if you use medium quality graphics settings). It also won't have any problems decoding high-definition TV signals and displaying them on your big-screen TV via its HDMI port.

Indeed, the A500 has a built-in hybrid TV tuner that can decode digital and analogue signals, and the best part about it is that you don't need an adapter to connect your antenna. 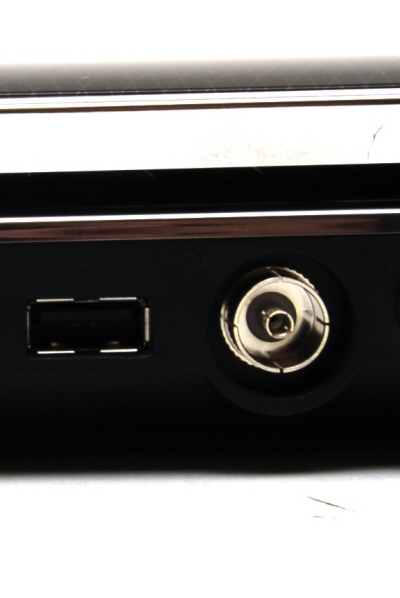 The A500 has a regular-sized antenna connection built in to the chassis.

You can play TV shows through the laptop, display them on your big-screen TV if you use HDMI and use the A500 as a digital video recorder or to time-shift programs. The HDMI port is a CEC (consumer electronics control) port. This means that if your TV supports this, then selecting the control port on your TV will switch on your laptop (on Toshiba TVs this feature is labelled Regza, while Samsung TVs call it AnyNet, for example). 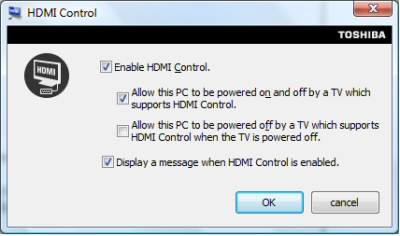 You can configure the laptop so that it powers on or off with your TV (if your TV supports the HDMI control function).

There are a lot of value-added features present in the Satellite A500 (as there are with the Satellite U500 which also recently hit the market). You get Sleep-and-Charge USB 2.0 ports (which allow you to charge MP3 players or even an iPhone without even switching on the laptop), diagnostic utilities, 3D hard drive protection (which parks the heads of the hard drive when it detects excessive movement), face recognition for security, an Eco utility (so that you minimise power consumption, as well as track it over time), and even voice command recognition. 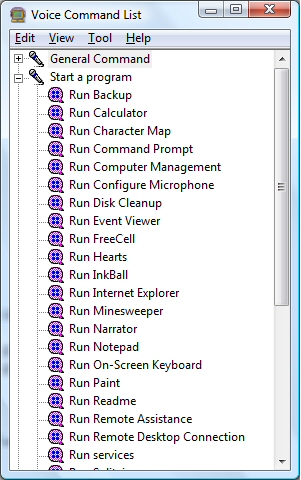 Voice recognition can be used to launch programs and undertake functions within programs, but it's not always accurate. For example, saying 'run calculator' ended up launching the sound recorder. That might be because we mumble too much.

Because the laptop is so big, there is plenty of room for the components' heat to disperse, so its base won't get overly warm; when you use it on your lap, you'll feel the weight before you feel the heat. You can use it away from an outlet for a reasonable amount of time, too. In our battery test, in which we disable power management, maximise the screen brightness and enable the wireless radio while looping video files, it lasted 1hr 33min. This isn't a bad result for such a big notebook.

In our benchmarks, the A500's 2GHz CPU performed well: it recorded a time of 1min 30sec in our Blender 3D test and 1min 22sec in the iTunes MP3 encoding test. Its MP3 encoding time is even faster than the Sony VAIO VGN-NW15G, which recorded 1min 27sec in the same test despite having a 2.1GHz CPU (though it only has 2GB of RAM). In our hard drive test, the A500's 500GB, 5400rpm drive (a Hitachi HTS545050B9A300 SATA drive) recorded a speed of 26.83 megabytes per second, which is fast for a laptop hard drive (although this transfer speed will get slower the more you fill up the drive).

The Satellite A500's screen has a native resolution of 1366x768 and has LED backlighting, but it does suffer from limited vertical viewing angles. This can be uncomfortable while watching movies but it is fine for typing. The screen is also glossy and has 'edge-to-edge' glass, so it is prone to reflections.

For $1899, there's not much to dislike about this notebook. It has all of the latest connections — you get external SATA; 802.11n networking via an Intel WiFi 5100 chip; an ExpressCard/54 slot; an SD card slot; a webcam; four USB 2.0 ports; HMDI CEC; Gigabit Ethernet; D-Sub; a TV tuner; and a digital audio output. The only port it's missing is FireWire, but this isn't essential unless you have an older iPod or camcorder. Add to that the notebook's dedicated media controls, illuminated keyboard, large touchpad (which supports gestures), decent speakers and DVD burner, not to mention all the value-added utilities and features, and you have a complete system that should serve you well for years to come.