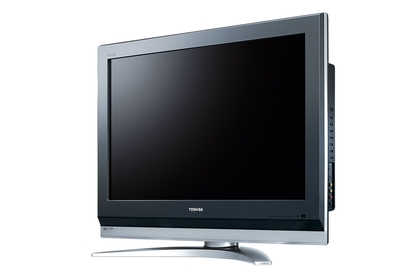 The Toshiba REGZA 47WL68A is a good all-round 1080p unit. It's not perfect and doesn't quite sit in the same league as the high-end units on the market, but at this price point, it represents excellent value for money.

The Toshiba REGZA 47WL68 is a 47in LCD television with a native resolution of 1920x0180. The first 1080p television from Toshiba, it is a valiant effort marred only by a handful of minor flaws. It doesn't quite meet the standard of the high-end 1080p televisions on the market, but at the price point, it certainly delivers value for money.

As with all 1080p televisions, our first port of call was the Blu-Ray test. Using the film Casino Royale we ran through various specifically chosen sequences to attempt to uncover any flaws or shortcoming with the 1080p (over HDMI) mode. Thankfully, there was very little to report. The overall definition of the image was crisp with no discolouration, no image noise and very little pixelation. The only issue worth mentioning was a slightly elevated level of motion blur. This is mostly minor and fairly subtle, but it has the potential to remove sensitive viewers from the on-screen action and thus needs to be addressed.

We also tested 1080p gaming using the Xbox 360 at 1080p resolution. Here, the REGZA didn't fair quite so well. While the images still looked excellent, there was noticeable contrast stepping at times, particularly during areas of complex particle effects. We also noticed some finer details becoming pixelated, particularly fine horizontal lines and curved objects. These issues are not conducive to the kind of gaming you would expect from a 1080p television but realistically, only an AV enthusiast would have cause for complaint as the overall quality and performance are still quite high.

The 1080i and 720p gaming tests followed suit with the same test results as their 1080p counterparts. However, the 1080i HD-DVD test produced remarkable results. Viewing the Empire State Building finale from King Kong on HD-DVD, we were impressed with the image. There was very little background noise and the image clarity was noteworthy. Colours were reproduced well and the black levels, while not the best we have seen, were still quite notable. There was no pixelation in fur or facial detail in Kong himself and no stepping on skin tones on the human actors. Overall, we had no problems with the HD DVD ability.

Standard definition DVDs are still as popular as ever, so if you're looking to buy a 1080p television you'll want to choose one that will cater to your already large DVD collection while also preparing you for your new found love of HD DVD or Blu-Ray titles. To test 576p (DVD resolution) we viewed the lobby scene from The Matrix to check for any image quality aberrations. We were quite surprised with the results. 1080p televisions generally have issues playing regular DVDs. This is because a 1080p screen has 2,073,600 pixels and a DVD disc only has 201,600 of information. To display the DVD on a 1080p panel, the television has to create all those extra pixels through some clever processing (interpolation) while also trying to maintain a high quality image. This is not an easy task, but the REGZA handles it beautifully. We found no discolourations whatsoever, very minor interpolation artefacts, no contrast stepping and no over-sharpening. There was some pixelation on curved edges but considering performance in other areas, this is easily forgivable.

There is one point that we noticed across all modes that we found quite curious. If the image changes from a dark image or scene to a light image, the black in the light image appear to "fade in". Immediately following a scene change there are no blacks in the image at all. Then, and this occurs very quickly, they fade up. We thought it was a by-product of the automatic backlight control but even after turning this feature off, the issue still persisted. We attempted to find a way to turn it off or reduce its affect, to no avail. While it is only a split second event, it will no doubt annoy some viewers.

To test how well the REGZA performed when connected to a PC we hooking it up to our test machine at the maximum supported resolution of 1280x768. Since the panel is 1080p, any resolution under 1920x1080 will be subject to interpolation and as such there was some banding and distortion in the DisplayMate Video Edition resolution tests. However, this issue didn't seem to affect the overall quality of the PC mode. We viewed documents and spreadsheets to check if the banding had any impact but found no issues. In addition, the desktop icons were clear and crisp and the colour and greyscale tests were passed without incident. The REGZA doesn't automatically detect when you are running a widescreen resolution though. This means that when you switch to a 16:9 resolution, you will need to change the screen mode to "wide" using the remote control.

The design of the unit is fairly understated which tends to give it an air of sophistication. In a market where many televisions have a piano black finish, the bezel on the REGZA has a matte black finish, which is accented by a silver base and stand. The stand is similar to the Sharp AQUOS "boomerang" shape and fits in nicely with the overall aesthetic of the unit. The rear panel houses an array of input options which includes two HDMI, two component, two composite, one S-Video and a 15 pin D-Sub port for connecting a PC. The speakers on the unit are hidden below the panel and produce excellent and loud sound with very little distortion at high volumes. The bass is good without falling victim to any muddiness and the treble registers are clear without losing detail. This is augmented rather well by the WOW SRS modes which boost the quality of the audio quite significantly when watching movies or playing video games. There is a reason that this unit has such a good price point and that is the omission of a digital tuner. Those wishing to purchase this unit with a HDTV tuner will be pleased to know that Toshiba also offers a similar 1080p unit with an integrated HDTV tuner as well.

The Toshiba REGZA 47WL68A is a good all-round 1080p unit. It's not perfect and doesn't quite sit in the same league as the high-end units on the market, but at this price point, it represents excellent value for money.