A great 46in LCD television, held back by a few inadequacies. 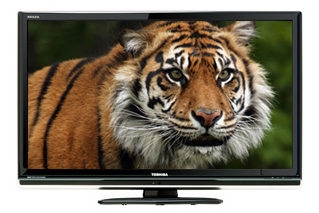 The Regza 46XV500A has features to match other brands’ best but a few flaws stop it from being number one.

The Regza 46XV500A is Toshiba’s flagship LCD television and it has a feature set to match other brands’ best. It combines great picture quality with solid construction, but a few flaws stop it from being the best of the best.

The TV has a sleek, piano-black bezel set off by a thin silver trim on the lower lip. It is one of the slimmer 46in units we have seen, at 94mm thick without the base attached. The remote continues this classy yet simple trend, with rounded buttons and an easy-to-understand layout.

Since the 46XV500A is the best Toshiba has to offer it is packed full of image enhancement features. A 100Hz mode smooths out fast motion, something called Meta Brain Pro deals with de-interlacing, scaling and noise reduction, and the Cinema mode supports 24p playback from Blu-ray discs.

The technical specs of the screen are also impressive, with full 1080p resolution, 30,000:1 dynamic contrast ratio and a solid brightness level of 450 cd/m2. When the auto-iris control is deactivated the contrast ratio drops to 3000:1, which is roughly equal to its competitors. Just like any other class-leader it has an HD digital tuner and plenty of digital and analog connectivity — three HDMI and composite inputs, as well as individual component, VGA and S-Video connectors. The inclusion of S-Video is interesting as most manufacturers are slowly abandoning the standard, while three HDMI ports is one less than Samsung’s best. We do not think this is much of a problem, though — the average consumer will probably only need three at most thanks to convergence devices like the PlayStation 3 that combine Blu-ray, video and gaming in one machine.

During our standard-definition DVD tests as well as during our high-definition Blu-ray and gaming tests the 46XV500A produced fantastic quality images without any trace of blurring, aliasing or image noise. Considering that digital television is broadcast at 720p or below, having high-quality scaling is important.

The contrast and brightness of the panel were also of an excellent standard. Colours were great during high-definition testing, though slightly too vibrant at default settings. Black levels were decent for a CCFL-backlit LCD, though we did find that the brightness needed to be adjusted to remove small instances of light bleed in high-contrast areas.

When fed with a high quality source in standard 50Hz mode the Toshiba 46XV500A looks spectacular — on par with the Samsung Series 8. There are some niggles but if you can find the 46XV500A for a bargain price it may sway you over.